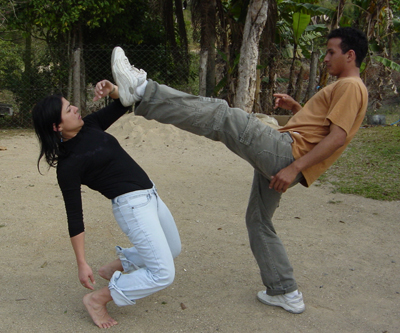 Stuntmen are trained to hit without causing any damage.
Photo courtesy stock.xchng

There are countless stunts and variations of stunts, but most of them are made from combinations of a few basic stunts. Here are some of the most popular that don't typically include fire.

When a fight is filmed, the actors and stunt people aren't actually hitting each other; or they're hitting each other in a way that looks impressive but doesn't do any damage. This is similar to the way pro wrestlers punch. Experienced Hollywood fighters know how to use camera angles to make their fake punches look like they really connected. Both the puncher and the punchee have to know how to "sell" each punch, performing movements that show the punch landed with serious impact, leading to an appropriate reaction from the victim [Source: Manny Siverio].

Live ammunition is never used on a film site. Guns are either props or loaded with blanks, ammunition that makes a loud noise but doesn't shoot a bullet. It should be noted that blanks can fire compressed gasses or bits of metal, so they're still dangerous, especially at close range. The impact of a bullet on a human is produced by using squibs. A squib is a small explosive charge (today a pneumatic charge is often used) taped to the victim's body in the appropriate place, with a small bag of theater blood on top of it. The whole rig is backed with a metal plate, protecting the actor from the charge and projecting it outward. The charges are set off remotely, or by the actor himself, via a button hidden in his sleeve, timed to the firing of a gun in the scene. When the charges go off, it rips through clothing and spurts the fake blood in a convincing facsimile of a gunshot wound [Source: Baxter]. Bullet hits on other surfaces can be faked by drilling the proper holes, covering them with painted putty or paper, then setting off charges to blow away the cover and reveal the hole.

A fall from a great height was once the bread and butter of stunt people. Today, these stunts are often accomplished with editing and green-screen, or digital special effects. When a true high fall is done, stunt people rely on one basic idea -- make sure the falling stuntman doesn't hit anything hard. For anything high, large airbags are the ideal choice. They're light and easy to transport, then inflated with air on location. An additional air bag is placed inside the first one for added protection. In the past, or for shorter falls, cardboard boxes with the corners cut off were used [Source: Emmens]. Modern high falls often use a bungee cord device that allows the stunt person to fall almost to the ground before bouncing back up unharmed.