The Hours and Pay of Stuntmen 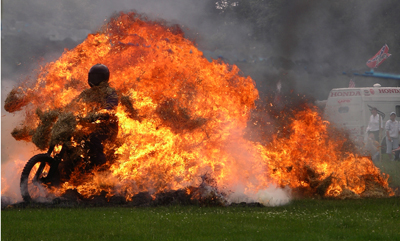 Life on a film set for a stuntman isn't especially glamorous. The days are long, sometimes lasting 14 hours or more. A shoot can often take place in uncomfortable situations -- they might spend hours partially submerged in water or have to do a location shoot on an icy mountain or a hot desert. Pay for a stuntman can vary widely based on their experience and the specific stunt they'll be performing on a given film. Only a very few top tier stunt people make six figure annual incomes.

The reason for the long hours is that a stunt requires planning, preparation, rehearsal and probably several retakes. It takes hours just to set up the pyrotechnic charges for a scene with explosions. Most stunts involving cars will require measurements and the setting up of ramps and crash barriers. All stunts should be rehearsed as closely as possible to the actual stunt, without any of the risk factors. For example, a car chase could be run through at low speed or a sword fight practiced with plastic swords. Once the actual stunt is filmed, it should be very predictable for everyone involved.

Some stunts may need to be filmed multiple times to catch additional camera angles or because something wasn't quite right the first time through. However, with many stunts, it isn't practical to re-shoot the scene. If the chase culminates with an explosion and a car crash, it becomes prohibitively expensive to destroy multiple cars for the sake of capturing the perfect shot. Plus, every time you ask a stunt person to repeat a stunt, the risk factor multiplies. This is another reason that a huge amount of planning and rehearsal goes into stunts -- the crew has to make sure the shot is captured right the first time to avoid costly and dangerous second takes.