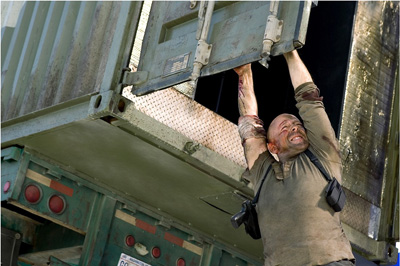 Stuntmen take very dangerous risks in order to give movies an added sense of realism. Learn about stuntmen and find out how stuntmen train for their stunts.
©2007 Twentieth Century Fox/ Photographer Frank Masi

The action hero leaps from the roof of a building and grabs onto a hovering helicopter. Then he drops to the seat of a convertible, fires the engine and takes off on a high-speed car chase. He spins, hits a parked car and flips the convertible as fiery explosions burst into the air around him. Tumbling to safety, he pulls a gun and ducks for cover as enemy agents fire hundreds of bullets at him. He returns fire and the bad guys fling themselves to the ground as bullet holes pierce their shirts and soak them with blood.

A lot of this is accomplished with "movie magic:" special effects, clever editing and carefully constructed props. But much of what you see on screen can only be depicted by daring performers who take on very real risks to bring these spectacular scenes to life. Stunt men and women spend years honing their skills so they can convincingly (and safely) perform stunts from a simple fist fight to elaborate car chases and explosions.

One of the most famous early stunts was one performed by Buster Keaton in which the front of a house falls on him, but the window falls around him so he is left standing unharmed. This risky stunt was accomplished simply by measuring very carefully.

Carey Loftin was a well-renowned stuntman who went on to perform and coordinate several great car chases, including “The Duel” and the legendary car chase in “Bullitt.”

The 1959 version of “Ben-Hur” features a lengthy and intense chariot race with dozens of horses and the top stunt performers in the film industry at the time. Joe Canutt doubled for Charlton Heston and was nearly killed in a thrilling sequence in which he was accidentally thrown from a chariot and almost crushed beneath it, before he grabbed onto the frame and pulled himself back into the chariot. The scene was edited into the final cut [Source: Baxter].

In this article, we'll learn how stunt people learn their craft, how certain stunts are done, and look at the safe, and not so safe, parts of the job. 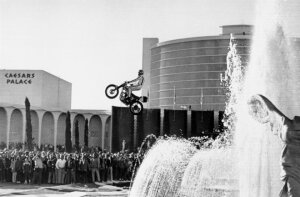 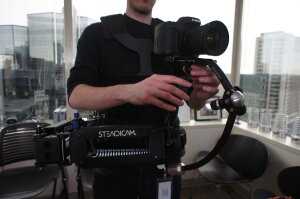