Stuntmen are Performers, Not Daredevils 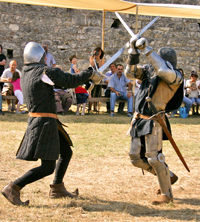 Stuntmen are often called in to perform stunts like swordfights, instead of teaching the actors how to do it.
Photo courtesy of stock.xchng

While many things can be referred to as stunts, including those performed by daredevils or the feats of extreme sports enthusiasts, movie stunts are undertaken by trained professional performers known as stuntmen and stuntwomen. Their goal isn't to accomplish the highest jump, biggest explosion or craziest stunt; their purpose is to create a realistic visual effect on film by performing a carefully choreographed and planned sequence.

Stunt work is dangerous -- injuries are common and deaths happen far too often. While a stuntman isn't going out of his way to do something dangerous, creating a realistic stunt often requires high-risk action. Training and technology help make stunts a lot safer than they were in decades past, but if all stunt sequences were perfectly safe, stunt people wouldn't be needed at all.

A stuntman is called in to a movie or TV set when the scene requires skills or risks beyond what the actual actor is capable of, or willing to do. For example, if the script calls for a sword fight, it's safer and often cheaper to use a stuntman with training in stage combat than to spend weeks or even months training the actor to fight. If the main character in a movie falls from a building, stunt people not only have the training to fall safely, but if they're injured their absence won't derail the entire production. Thus, it makes financial sense for directors to use stunt people.

Despite every safety precaution, every stunt carries some risk. California state laws and Hollywood union rules have added regulations to protect stunt people and film crews over the years, but injuries and sometimes death are always possible. In the early days of film, deaths were almost common. The Howard Hughes air combat film “Hell’s Angels” suffered from numerous crashes and three (or four, depending on who you ask) fatalities. Three extras drowned during the flood scene in the 1928 film “Noah’s Ark."

Modern film shoots have been the scenes of some horrific stunt tragedies as well. Several high-profile deaths have captured media attention, such as the decapitation and crushing by a crashing helicopter of actor Vic Morrow and two Vietnamese children during the filming of “The Twilight Zone,” and the accidental (and fatal) shooting of actor Brandon Lee with a "dummy" bullet while filming “The Crow.” Many more are the nearly anonymous stunt actors who have been killed or seriously injured creating the high-action entertainment that film-goers love. It’s a risky business and always will be.