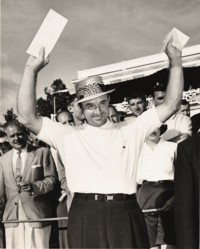 An image of the golf swing that Sam Snead liked to project was: "It should feel oily." He spoke from personal experience, for Snead had one of the smoothest swings the game has ever known.

So fluid and full was Snead's swing, people thought he was double-jointed. Snead always smiled at the remark, enjoyed the compliment, but noted, "No one has double joints. I'm just loose-jointed. That's the proper way to put it."

In fact, he was born with his vertebrae out of line. "I'd have been two inches taller if not for that," he said.

Snead could have gone to college on an athletic scholarship in baseball or football, but his high school coach advised Sam that if he spent the four years in golf rather than in college, he would be further ahead. "I wanted to be an athlete," said Sam, and that he was.

His natural talent was monumental, and despite the misaligned vertebrae he was an amazing physical specimen who maintained his highest level of play for an uncommonly long period of time.

Snead won his first tournament as a professional in 1936. He won his last on the regular PGA Tour, the Greater Greensboro Open, in 1965, when he was just short of his 53rd birthday. That made him the oldest winner ever on the Tour, a record that might well be etched in stone.

Samuel Jackson Snead was born in Hot Springs, Virginia, in 1912. He began caddying and playing golf at age seven at the famed Homestead Hotel, where his father worked as a maintenance engineer. A marvelous story teller, Snead once recalled in Gettin' to the Dance Floor: An Oral History of American Golf his first days at golf:

"My uncle used to come up on Sunday and get me by the hair and say, 'Come on, let's go pitch horse­­shoes. ..." He couldn't beat me. So one day I was out back fooling around chipping -- see, I put some tomato cans in the ground to make some holes and I'd chip with a jigger, which was like a 5-iron -- and my uncle said, 'Gimme that,' meaning the jigger. So now we stopped playing horseshoes and started chipping. I beat him at that, too. Then one Sunday he came up with a bag of clubs, half left-handed, half right-handed, and said, 'C'mon, damn you, we're going up to the Goat.' That was the name of the little nine-hole course at the hotel where we could play. You'd play six holes up the mountain, and three of them off it. After a hole I'd ask my uncle, 'What'd you have, Uncle Ed?' He'd say he had a 5 or 4 and I'd say, 'Yeah, but you whiffed it down there a couple of times,' and he said, 'Son, those were practice swings,' and I said, 'No, you grunted. When you grunt, you made an effort and it counts.'"

"That was my first golf, up and down the Goat. Oh, they wouldn't allow us on the regular courses -- Cascades, Upper Cascades -- but we'd slip on through a wooded area at the far end where a green was and chip and putt. If we saw somebody, we'd head for the brush."

It wasn't too long before Snead would be welcome at every great and famous golf course in the world. He started as a professional making clubs in the Homestead pro shop, also gave a few lessons, and then at age 20 was made the pro at the Cascades course.

It was there that he began developing, or perfecting, his remarkably graceful swing and honing his championship game. "There hadn't been a pro there since the Crash of '29," Snead recalled. "So I had a chance to practice, and I beat sod. Oh, I beat sod. They said, 'Hey, you're beatin' all the grass off.' I broke the course record twice the first two weeks on the job."

Snead played on the PGA Tour for the first time in the 1935 Miami Open, making the trip in a Model A Ford. It took 2 1/2 days to get there. "Going down through Georgia," Snead remembered, "there were one-way wooden bridges that might be 300 yards long and you had to look ahead to see if there was anyone at the other end coming on. If he was on first, then you'd have to wait your turn to get over."

Two years later, Snead put together enough money to travel to California for the West Coast portion of the winter tour, and it was then that Snead's playing career, and public persona, emerged.

Snead won $600 in the Los Angeles Open. The next week, he won the Oakland Open, from which an anecdote was born that became the yardstick by which Snead's personality was measured for all time.

His picture appeared in The New York Times, and upon seeing it Snead asked Tour manager Fred Corcoran how his picture got in a New York newspaper when he'd never been in that city. Corcoran, a master promoter of the Tour who knew a good line when he heard one -- and who became Snead's business manager -- never tired of relating that story. It brought attention to the circuit and established Snead as a kind of naive mountain boy. It worked, largely because Snead became one of the greatest players in the history of the game.

Snead won four more times in 1937, and the next year he won eight events on the circuit, a record total that would not be topped until 1945. In '37, it appeared Snead would also win the U.S. Open. He shot a final-round 71 at Oakland Hills C.C., but a late rush by Ralph Guldahl (69) put Snead second by two strokes. It was the beginning of Snead's career-long disappointment in the national championship.

He would win an official 81 tournaments on the PGA Tour, including three Masters and three PGA Championships -- plus one British Open -- yet he would never win the U.S. Open. He came close a number of times, including a playoff loss to Lew Worsham in 1947.

It was said that Snead lost his nerve for the most coveted of championships in 1939 by taking an 8 on the last hole when a 5 (par) would have brought him victory.

Some would also suggest that because Snead never won the U.S. Open, he was not the complete champion that his arch rival, four-time U.S. Open winner Ben Hogan, was. And yet, in the three times Snead was in a playoff head-to-head against Hogan -- including once for the Masters -- he won every time.

Of the many comments Snead would make when asked about his U.S. Open record, the most incisive was: "When they say that I couldn't win the big one, I ask: What do you call all those others? What's big and what's small?"

Indeed, Snead's seven triumphs in the modern majors is a number surpassed by only five other golfers. In 1946, he proved he could win in the granddaddy of tournaments, the British Open, on the grandest course, St. Andrews. He prevailed by a full four strokes.

Because of his incredible longevity as a first-class golfer, Snead was on the ground floor of, and a significant factor in, the development and growth of the Senior PGA Tour.

In the first Legends of Golf event, the tournament that gave rise to the Senior circuit, Snead -- on national television -- put on a display of birdie golf on the final nine to bring him and his partner, Gardner Dickinson, an extremely popular and wonder-filled victory.

At the age of 66, and by now finally retired from PGA Tour golf, Snead's swing was just as oily as ever as he outdrove and outplayed two golfers 17 years his junior -- Peter Thomson and Kel Nagle -- to win by a stroke.

Indeed, as a senior golfer, Snead won six PGA Seniors Championships, five World Seniors, and -- in 1982 with Don January -- yet another Legends of Golf tournament. He never grunted. Not once.