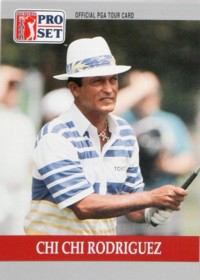 Growing up in a poor family in Puerto Rico, Juan "Chi Chi" Rodriguez began his long road to golf fame and fortune at the age of nine by swinging at tin cans with a limb from a guava tree.

Ed Dudley, the pro at the local course, gave Rodriguez a job as a shoeshine boy, then as caddie master, and fostered the enthusiastic youngster's development as a player.

At 17, Rodriguez, who took his nickname from his favorite baseball player, finished second in the Puerto Rico Open. He then joined the U.S. Army and began saving money for a shot at the PGA Tour.

Rodriguez made it to the Tour in 1960, at age 24, and scored his first victory three years later. Though he stood 5-7 and weighed 130 pounds, Rodriguez took a ferocious swing and hit the ball reasonably far off the tee. He was also one of the game's finest shot-makers, able to work the ball left-to-right or right-to-left at will and to get out of trouble with a variety of imaginative shots.

Chi Chi also became known for entertaining the galleries with his quips and antics, which included putting his hat over the hole after making a putt and wielding his putter like a sword in celebration. He toned down his act slightly after a few leading pros persuaded him that it was sometimes distracting to fellow players, but he remained a fan favorite.

Rodriguez finished his Tour career with eight victories, enjoying his best year in 1964 when he had two wins and was ninth on the money list. He ranked among the top 50 money winners in every year but one from 1963-74.

Rodriguez's game blossomed on the Senior Tour, which he became eligible for late in 1985. He led the money list in 1987 when he won seven tournaments, including the PGA Seniors Championship, and finished in the top three 14 times. In his first six senior seasons, he won 20 times.