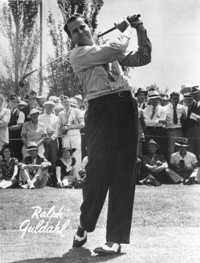 The mercurial Ralph Guldahl was at his peak in the late 1930s. See more pictures of the best golfers.

Ralph Guldahl's up-and-down career is one of the great mysteries of golf, but for a few years in the late 1930s he was the best player in the game. The 6'3'' Texan is one of only six players to win back-to-back U.S. Opens, claiming the title in 1937 and 1938.

Guldahl first emerged in 1932 when he won the Arizona Open at age 20. He nearly won the 1933 U.S. Open, missing a four-foot putt on the 72nd hole to finish one stroke behind Johnny Goodman.

Then he went into a slump and quit the Tour in frustration in 1935. After changing his grip and spending long hours practicing, Guldahl returned in 1936 and led the Tour in scoring average.

Guldahl beat Sam Snead by two strokes at Oakland Hills in 1937 to take his first U.S. Open title. He eagled the 8th hole and birdied the 9th, then learned he could beat Snead with a 37 on the back.

The next year, at Cherry Hills, Guldahl also closed with a 69 to win by six strokes. At the Masters in 1939, Guldahl beat out Snead by one stroke with another final-round 69.

Guldahl won a couple tournaments in 1940, but the next year he struggled greatly. He took motion pictures of his swing and compared them with his swing when he won the Masters, but he couldn't find the fatal flaw.

All he knew was that the winning touch had vanished. His enthusiasm for the game gone, Guldahl left the Tour in 1942 and, except for brief periods, never returned.