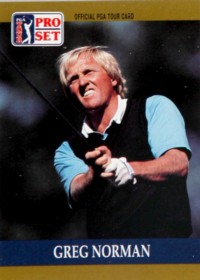 Throughout his career, Greg Norman has been an enigma. Winner of about 70 tournaments worldwide and more than $10 million in prize money on the U.S. PGA Tour alone, Norman still may go down in the game's annals for how many major championships he lost -- more specifically, how he lost them.

In 1986 alone, Norman held the lead in all four of the majors going into the final round of play, yet he won only one of them, the British Open.

In the 1996 Masters, his collapse in the final round was one of the most astonishing and perplexing of them all. He shot a course record-tying 63 in the first round, then -- with a six-shot lead going into the final round -- shot a 78 to finish second, five shots behind the winner, Nick Faldo. It was the largest lead ever "blown" in the last round of a major championship.

Yes, it's been a star-crossed career for Norman, full of amazing highs and equally amazing lows. Born in the mining town of Mount Isa in Queensland, Australia, in 1955, Gregory John Norman was by his own description a "skinny, scrawny" youth.

Self-conscious of his physique and bound to overcome it, his first athletic interests were in the contact games -- rugby, Australian rules football, cricket, squash, and particularly swimming and surfing. He also worked diligently at weight lifting to develop his body.

He did indeed become an impressive physical specimen -- just over six feet tall, weighing 180 pounds, with broad shoulders, a trim waist, and strong legs. He developed an aggressive, power-oriented golf game that would be adored by the golfing public.

Norman did not take up golf until he was 16. His father, a mining engineer, did not play much, but Norman's mother was a three-handicap golfer. While caddying for his mother, Norman decided to hit a few to see what it was like.

He was a long-ball hitter from the start, and with that as the carrot he took up the game. Within two years, he went from a 27 handicap to a scratch golfer, and he became a significant factor in Australian amateur golf.

He turned pro in 1976 and began competing on the Australian Tour. He then spread his wings to play the international circuits. From 1977-82, "The Shark" won at least one tournament every year, including such prestigious titles as the Australian Open, Australian Masters, French Open, and Dunlop Masters.

In his first U.S. Masters, in 1981, he finished a very respectable fourth, only three shots off Tom Watson's winning score and one behind runners-up Jack Nicklaus and Johnny Miller.

In 1984, Norman began spending more time on the U.S. PGA Tour, where that year he won the Kemper and Canadian Opens. He also was in a playoff for the U.S. Open, where he exhibited for the first time a tendency to self-destruct under ultimate pressure. Three shots behind Fuzzy Zoeller with nine holes to play, Norman drew even after 17 holes and then drove well on the 18th.

However, his 6-iron approach was pushed some 40 yards right of the green into a grandstand. After a free drop, he managed to save his par (4) with an incredible 45-foot putt over severely undulating terrain. In the playoff, though, he was overwhelmed, 67-75.

In the 1986 Masters, Norman's proclivity to fail at the moment of truth reared up again. Needing a par-4 on the last hole to tie Nicklaus, he hit a 4-iron approach far right of the green and bogied the hole to finish tied for second. Three months later, he won his first major, the British Open, by five strokes.

But the following month, he let Bob Tway back into the PGA Championship, shooting a final-round 76 to give up a four-shot lead with 18 to play and setting the stage for Tway's smashing finish; he holed a bunker shot on the 72nd hole to win, by two.

The pattern was settling in. Norman would either win big, dominating the field, or more often than not let others catch him with his mediocre to poor play against an opponent's fine play and occasional spectacular single shot. He lost the 1987 Masters when Larry Mize holed a 45-yard chip shot in sudden death.

Through all the shocking defeats and collapses, even as he has cut back his overly aggressive game management, Norman has maintained a calm public demeanor. He simply points to his overall record, which is indeed remarkable. Over 14 seasons through 1996 on the U.S. Tour, he posted more than 100 top-10 finishes, including 17 victories, and won the Vardon Trophy for low scoring average three times.

The game is there, and of course the money has followed. In 1995 alone, he set a PGA Tour season record for money won with $1,654,959. He soared to No. 1 on the career money list despite playing a limited schedule.

And yet, he is found wanting. A golfer of his ability is supposed to win more majors, and certainly more than a few of those he leads going into the last round of play. He shrugs at the notion and says he will just keep trying. Of that, we can be sure.

Some have said he was never the same after the devastating collapse in the 1996 Masters. He didn't land another major win until June of the following year. That victory was special in another way: it made him the first golfer ever with career earnings more than $11 million.

Shortly afterward, President Clinton took a tumble on the steps of Norman's mansion in Florida and tore up a knee tendon, and the problem seems to have been contagious.

Norman missed the cut at the 1998 Masters, and then he had shoulder surgery. Back problems and a pair of knee surgeries kept him out of active play for years. But he is a highly successful businessperson, supposedly worth as much as $500 million.

In the 14 seasons of his career he was ranked number one for 331 weeks. He finished in the top 10 in 100 tournaments and earned the Vardon Trophy for lowest average score three times. But Norman still shares a dubious record with Craig Wood -- the only two men to appear in a playoff for all four majors and lose every one.