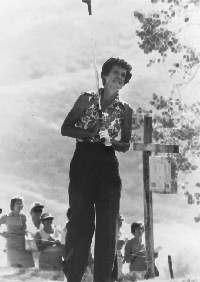 Kathy Whitworth's athletic talent and determination to maintain a high standard for achievement led her to become one of the best women golfers.

Kathrynne Ann Whitworth was born in Monahans, Texas, in 1939 and raised in Jal, New Mexico, where her father and mother ran a hardware store.

A natural athlete, and inclined to play sports despite the social stigma this meant for someone of her gender in her generation, she took up golf at the age of 15 and showed enough promise from the start that a teacher of the highest repute took her on as a student -- the great Harvey Penick.

At 19, Whitworth won her second consecutive New Mexico State Amateur championship and left a college in Odessa, Texas, where she had a golf scholarship, to turn pro.

Whitworth's father and two businessmen friends promised her a three-year sponsorship on the LPGA Tour, which was just beginning to get on its feet. Moreover, Wilson Sporting Goods signed her to a contract that included paying her expenses plus a stipend for doing golf clinics, and she was on her way.

Whitworth seemed set to light up the women's golf world right from the start, but her fuse happened to be a slow one. In her first season on the circuit, 1959, she entered 26 events and won a grand total of $1,217 on the basis of a scoring average of 80.30. Nevertheless, she hung in there to become the biggest winner in American golf history.

It is difficult to imagine that the tall, slender, tautly muscled woman fans saw for so many years weighed over 200 pounds when she was in high school. "I'd probably be the fat lady in the circus if it hadn't been for golf," Whitworth once said. "It kept me out of the refrigerator."

As she gradually pared down to her playing weight, 145, which she maintained throughout her career, her game improved accordingly. In 1962, Whitworth won her first LPGA tournament, the Kelly Girl Open, and won one more that season.

Although not a very long hitter of the ball, Whitworth was long enough for her time. More important, she put together a very functional and repeatable golf swing. It wasn't the kind that lasts for the ages, and it wasn't the flowing poetry in motion of Mickey Wright, but neither was it Nancy Lopez's exotic manifestation. It was right down the middle, which is where Whitworth played most of her golf. The Whitworth swing held up very well.

In 1963, Whitworth won eight tournaments. She had a quiet '64, with only one victory, but in 1965 she won eight more times, including her first major, the Titleholders Championship, which she won again the next year.

In 1967, she won eight events including two more majors -- the LPGA Championship and the Western Open. She was on a long and good roll, but after her 1973 season, when she won seven times, the physical and emotional strain of playing at such a high level for a decade did take its toll.

She even had a notion to pack it in. But it was only a notion, it was not Whitworth, and she came back to win again and again. In all, she won 88 LPGA events, which is the all-time record among both men and women.

It is a curious coincidence that just as Sam Snead on the men's side won more tournaments than any other of his gender (81 officials plus a British Open) but never won the U.S. Open, so it was with Kathy Whitworth, who never could take the U.S. Women's Open. And just as in Snead's case, the missing major in her record doesn't at all diminish Whitworth's career.

What's more, it should be added that while accumulating her competitive record, Whitworth held at one time or another every LPGA administrative office at least once -- from treasurer to three-time president -- a time- and energy-consuming labor that Snead and the other greats never had to take on.

Whitworth joined the LPGA circuit in the days when it was run by the players themselves, with everyone pitching in to lure sponsors, organize the events, and in some cases even cut the holes. And yet, while performing her various organizational duties, she was the leading money winner eight times and won the Vare Trophy (for low stroke average) seven times.

Though her winning purses were as low as $800, Whitworth won so much that she became the first woman to reach $1 million in career prize money.