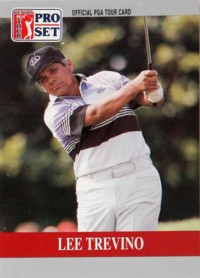 Lee Trevino's first experience in golf was as a pre-teen hunting golf balls hit out of bounds into a field near where he lived -- a simple four-room wooden house with no electricity or plumbing.

There was nowhere for him to go but up. He did on the strength of an overwhelming desire to do just that. He made himself a man of means playing a game at which he worked very hard.

Born in 1939 in Dallas, Lee Buck Trevino was raised by his mother and a grandfather. He left school after the eighth grade to earn money for the family by working at a par-3 course.

After serving four years as an enlistee in the Marine Corps, Trevino returned to work at the par-3 as well as at a driving range.

But he made more money wagering on himself at golf -- and not all of it the "traditional" kind. His most famous hustle was hitting his shots with the fat end of a taped-up Dr Pepper bottle and putting with the thin end, a la billiards.

As his game with real clubs improved, the bets got bigger and so did the competition. Once in the early 1960s, Raymond Floyd -- already a nationally known golfer who also liked to play high-stakes golf off the PGA Tour -- got hooked up in Texas against a fellow named Trevino. Floyd left lighter in his wallet, and he was glad to be free of the then-unknown Mexican-American with the tattoos who putted with the fine touch of a safecracker and had even more nerve. Of course, Floyd would not be free of Trevino, nor would any other Tour golfer.

In his formative years, Trevino had a "classic" swing, but it just didn't work. He hooked the ball badly under pressure. Then one day he watched from afar Ben Hogan practicing, and he liked the controlled left-to-right fade Hogan hit, one after another. Trevino decided that flight pattern was for him, and for five years, on his own, he worked on a way to accomplish it.

In the end, it didn't look at all like Hogan's swing, if only because of Trevino's short, chunky physique, but he got the same result. And then some. No one questions the assessment that Trevino became the best ball-striker since Hogan. In the 1990s, he was once asked when he last hit a ball out of bounds. In all sincerity, he ­couldn't remember. Nor could anyone else.

Trevino turned professional in 1960, but he somehow never joined the PGA of America and thus did not qualify to play on the Tour, then run by that organization. He had to play in open events, and in 1965 he won the highly competitive Texas State Open.

In his first U.S. Open, in 1966, he made the cut and finished 54th. He continued to practice, give some lessons at an El Paso club where he was an assistant pro, and hustle on the golf course to take care of a growing family by his first wife. It was she who suggested Trevino enter the 1967 U.S. Open, being played in New Jersey.

Trevino scraped together some money, lived inexpensively far from the course (Baltusrol G.C.), and made his name known for the first time outside of Texas by finishing a very solid fifth in the championship.

With the $6,000 he took in, and a showing that enabled him to get into subsequent Tour events that year, Trevino won another $20,000. He was set, financially and game-wise, to begin his invasion of major-league professional golf. He was indeed an overnight sensation.

At the 1968 U.S. Open, Trevino stayed close to the lead through three rounds, then canned two birdie putts at the 65th and 66th holes with a combined length of 55 feet to ice victory.

He became the first to ever win a U.S. Open with all four rounds in the 60s. The brilliant golf, combined with a quick and funny wit delivered with the panache of a stand-up comic, turned Trevino into a gallery favorite.

From 1968-84 on the PGA Tour, Trevino won 27 times, including another U.S. Open (in a playoff with Jack Nicklaus) and two PGA Championships, the last coming at the age of 44.

Not even lightning could stop him. Trevino (along with golfers Jerry Heard and Bobby Nichols) was struck by lightning during play in the 1975 Western Open. Still, at 36, he recovered enough to win nine more PGA Tour events, including his second PGA Championship (sixth major) and 26 Senior Tour events from 1990-95.

Near the end of 1995, however, Trevino had major back surgery in which a permanent plate was inserted through his neck to fuse disks.

The back problem may have derived in part from the lightning bolt, but more likely it resulted from having hit hundreds of practice balls every day, day in and day out, for years.

All the hard work had finally caught up with him, but by then the poor kid from the other side of the tracks had become a multimillionaire--and one of the most accomplished and popular golfers the game has ever seen.

What Are the Odds of a Hole-In-One?
What is the history of golf?
Top 10 Putting Tips