How do movie productions shut off streets for filming? 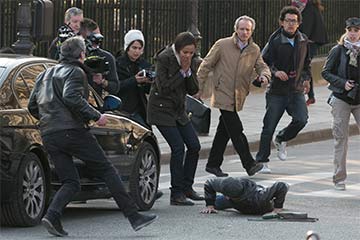 You've just received a note in your mailbox -- or an e-mail blast from a community organization -- informing you that your street will be closed to traffic for the next few days because a movie is filming on your block. Depending on where you live, this could be cause for great excitement -- or just an eye-roll.

In most communities, a film production coming to town -- especially one big enough to shut down entire streets -- is a once-in-a-lifetime event. People can hardly talk about anything else, and everyone floods the area, cameras in hand, clamoring for a celebrity sighting or two. In places like New York or Los Angeles, blasé locals push through crowds of extras on the sidewalk or resign themselves to taking yet another detour around a film shoot.

So how are film productions allowed to completely shut down sections of a town and disrupt the lives of innocent citizens? It's money, pure and simple. Movie productions pump a lot of cash into local economies. Larger cities that are accustomed to working with the film industry have offices that work to attract movie productions and also deal with the filmmakers while they're in the area. Small towns jump at the chance of a cash infusion and also the excitement of being seen on the big screen. Most cities and towns will bend over backward to accommodate movie productions, whether that means giving tax breaks, closing streets, providing police assistance or simplifying the permit process. Whatever it takes to make sure that filmmakers will continue to come back and spend money.

When a movie production rolls into a town and wants to be able to shut down some streets, permission is obviously needed (unless they'd like to roll back out of town very quickly). Even if a town hasn't had much experience with movie crews, there's usually some kind of event-permitting process in place. The production's location scout finds the locations, and the location manager works with the city's government or film office to secure permits and nail down street closings and traffic management.

The permit process varies from location to location, but the basics are the same. Either as part of the general filming permit or on a special form for street closures, the production must specify exactly when and where it would like to shut down a street. Then the town or film office considers traffic patterns, time of day and how much disruption the production could cause. If the permit is issued, there's usually a protocol for notifying local businesses and residents that might be inconvenienced. The production will also usually get some form of assistance from the police for traffic control.

So even if you live in an area where disruptive film productions are a dime a dozen, you can't get too mad about a street closure that's producing revenue for your hometown -- even if you're above snapping pictures of the stars.