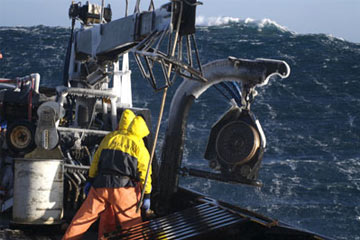 Thirty-foot (9-meter) waves are nothing new to the fishermen in the Bering Sea.
Discovery Channel

In the 2000 Wolfgang Peterson film "The Perfect Storm," actor George Clooney portrays Billy Tyne, captain of the ill-fated Andrea Gail fishing boat. The story comes from a real-life incident -- three storms meet in the Atlantic Ocean where the Andrea Gail and her crew are hauling in swordfish. All six crew members perish. The movie gave audiences an inside look at the extreme weather and lethal work that members of the commercial fishing industry endure. It also paved the way for a television show that, several years later, would put viewers on those boats.

"Deadliest Catch" debuted on The Discovery Channel in the spring of 2005. While "The Perfect Storm" followed sword fishermen in the Atlantic, "Deadliest Catch" takes viewers inside the lives of commercial crab fishermen on several different vessels off the Alaskan coast's Bering Sea. Airing in 150 countries, "Deadliest Catch" consistently draws up to 3 million viewers in the United States each week. The show was created by executive producer Thom Beers, of Los Angeles-based Original Productions. Beers dreamed up the idea after spending time aboard the fishing boat Fierce Allegiance while filming another Discovery show called "Extreme Alaska."

The show is titled "Deadliest Catch" because of the inherent peril of the Alaskan crab fishing industry. In the 1980s, the job was at its deadly peak, with an average of 37 fishermen perishing each year. New safety regulations and changes in how fishing permits are granted has led to a decline in the death toll. Still, between 2003 and 2008 an average of 11 fishermen per year died at sea [source: Pemberton].

Drowning accounts for 87 percent of those deaths -- generally man-overboard or sinking-boat scenarios. Deck injuries account for the other 13 percent [source: CDC]. On deck, you run the risk of being crushed by a swinging 800-pound (362-kilogram) crab cage called a pot. You could also get entangled in a winch, smashed by a hydraulic lift or sucked into a bait-cutting machine.

Sound brutal? That's because it is. In this article, we'll take you inside "The Deadliest Catch" and the grueling business of capturing crab. But first, let's learn how to translate all that crab fishermen vernacular. 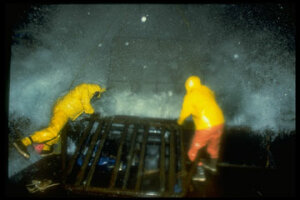