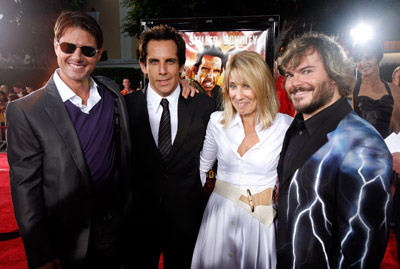 Movie filming techniques have come a long way from placing one or two stationary cameras in front of a stage set where actors read their lines. Consider the challenge of filming the opening scene of "Tropic Thunder" (2008). The scene, which was shot live, introduces the main characters in a firefight at a helicopter landing area and ends with a huge napalm explosion.

Cinematographer John Toll, the director of photography for the movie, says that the filmmakers only wanted to film the tricky scene once because it required so many live explosives. For him, that meant not only figuring out the best angles and camera placement but also considering and planning for everything that could go wrong.

To capture the scene on film, Toll and his camera operators used seven or eight cameras on the explosion, a couple of angles for blue screen plates that would be used later for close-ups of the actors and a camera operator shooting from a helicopter. The actual filming went off without a hitch.

But while the opening scene may have been the most complicated, "Tropic Thunder" called for more quick thinking and a range of cameras to capture jungle warfare. Over the course of 10 weeks filming on Kauai and then additional scenes at Universal Studios, two-time Oscar winner Toll switched among cameras on dollies and cranes, Steadicams and handheld cameras on the ground, on moving trucks and in helicopters.

And beyond the cameras were decisions about which lens and frame rate to use in each scene, as well as film format -- in this case, Super 35 for wide screen -- and value of a digital intermediate in postproduction [source: International Cinematographers Guild].

Job Description of a Cinematographer 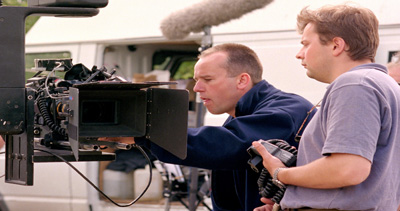 Basically, cinematography means bringing a story to life visually. The word's Greek roots are kinema (movement) and graph (writing). Bringing movement to screenwriter's script requires more than simply shooting photos or video of a scene. The primary cinematographer, or director of photography, works with the film's director to capture the underlying story in a way that will captivate the movie audience. Camera operators and cinematographers for specific scenes or types of scenes work to fulfill the overall vision.

The visual interpretation of the story can be as big as "Tropic Thunder's" napalm explosion or as small as a snow globe dropped from a dying man's hand while he whispers the word 'Rosebud' in "Citizen Kane" (1941). The cinematographer's job is finding the images that bring the story to life and capturing its meaning in a memorable way [source: Blain Brown].

But while that's a general description, the director of photography also has a lot of specific responsibilities related to making a movie. In fact, the cinematographer's job starts before a single frame of film is shot.

The cinematographer discusses the director's vision for the film with him, both overall and scene by scene. Based on that, the cinematographer determines what's needed for each scene, within budget, and hires the camera crew, arranges for equipment and buys film and supplies. The cinematographer also works with other departments, like sound and lighting, to coordinate production needs.

The cinematographer coordinates the crew and works with the director to make sure each scene is set up and shot to match the director's vision of the story. For each scene, the cinematographer decides on the best combination of cameras, filters and lenses, as well as where the cameras will be placed, what the lighting should be and when the scene will be shot. On large films, several cinematographers may oversee different camera set-ups. Others may serve as second-unit directors, shooting background or locations without the actors. The director of photography oversees them all, often also managing the photography budget.

The cinematographer works with the processing lab to make sure the film retains the color and mood that he and the director wanted. The cinematographer also reviews dailies, as well as the first and final print of the film. Being a critical eye and part of quality control is important throughout postproduction [source: Tanja Crouch].

Being a cinematographer requires special skills. Go to the next page to find out what they are.

Required Skills of a Cinematographer 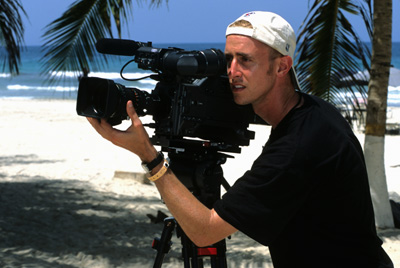 Whether a cinematographer is a director of photography or a camera operator, he needs both creative and technical skills to succeed, as well as knowledge of the most up-to-date equipment and technology and the flexibility to change and work as a particular film or the movie industry requires.

Here are some of the most important cinematographer skills:

Because filmmaking is a collaborative art, bringing many people together in the production process, a cinematographer needs the ability to get along and work with everyone. As cinematographer John Schwartzmann phrases it in the book "100 Careers in Film and Television," "The most important skill that you need to be successful in the film business is to be able to play well with others."

Sound like the right job for you? Keep reading to find out how to become a cinematographer. 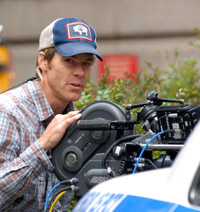 For lots more information about cinematographers and related topics, view  the links on the next page.