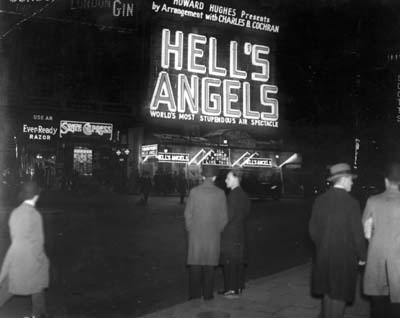 He was a 22-year-old movie producer with a few films under his belt and a lot to learn. He wanted to make the greatest aviation film epic ever, so he bought 40 fighting planes for $500,000 and nearly bankrupted the family business. He wanted the right cloud formations in the background, so he delayed production for months.

He interfered so much that the director quit -- and so did a second director. And when the pilots said a particular maneuver was too dangerous to attempt, he took over as stunt pilot and crashed. "Damn. We've just lost our meal ticket," one of the squadron leaders reportedly said, looking over at the wreckage.

But the pilot was wrong. "Hell's Angels" opened in 1930 to critical acclaim and made Jean Harlow a star. Billionaire Howard Hughes survived the crash and went on to produce more than 20 movies, including "The Front Page" (1931), the controversial "Scarface" (1932), and "The Outlaw" (1943) [source: Internet Movie Database].

Probably no other movie producers could claim such a flamboyant, early career in movie production, although others like George Lucas and Steven Spielberg began making amateur movies in high school. But one thing these film makers seem to share in common is perseverance [source: Britannica].

Movie producers can do everything from finding the idea and developing the script to working with the studio to market and distribute the film -- all to create the highest quality movie, delivered on time and within budget.