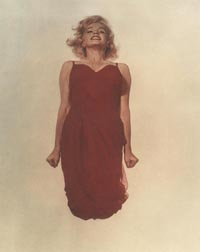 The troubled Hollywood goddess summoned her natural exuberance for a 1959 session with photographer Philippe Halsman.

That Marilyn Monroe's popularity was immense during her lifetime is understandable, but the escalation of her fame since her death is considered nothing short of a phenomenon, and has been a continual source of fascination to biographers, cultural critics, and her fans.

Undoubtedly, part of our unending interest in Marilyn is due to her premature death and the mysterious circumstances surrounding it.

Occasional efforts are made to persuade the Los Angeles police to reopen her case. At such times, speculation and rumor run rampant as a few more bits and pieces of information come to light.

In 1974, Robert Slatzer, a onetime friend to Marilyn who claims to have married her in 1953, authored a book alleging that the famous star had been murdered.

Entitled The Life and Curious Death of Marilyn Monroe, the book cites her relationship with both Kennedys, probes into the questions surrounding her death, and comes up with a provocative -- but ultimately unconvincing -- conspiracy theory.

Slatzer hired a private detective named Milo Speriglio to obtain hard evidence to support his theory. Speriglio has devoted more than 15 years to the case and claims to know who murdered Marilyn and why, though he can't prove it.

In 1982, he offered a reward of $10,000 for Marilyn's so-called "red diary," which the detective claims details her conversations with Robert Kennedy. Supposedly, Slatzer saw the diary a few days before Marilyn died, while coroner's aide Lionel Grandison noticed it in the coroner's room.

Interestingly, Speriglio's announcement about the diary coincided with the publication of his first book, Marilyn Monroe: Murder Cover-Up, which recaps Slatzer's book and brings the investigation up to date.

Cover-up rumors keep Marilyn's name in the press, even though she died years ago.

Later that year, a collector of rare books offered $150,000 for the diary, which has

yet to surface; many people doubt its existence altogether.

In 1986, Speriglio wrote a second book on the Monroe case, The Marilyn Conspiracy, which is an updated version of his earlier work. That same year, Speriglio called a press conference to demand that the case be reopened. His request was denied.

Though many doubt the veracity of Slatzer and Speriglio's theories and conclusions,

the rumors of a murder or a cover-up serve to keep Marilyn's name in the news, as do the tributes and retrospectives that surface on the anniversary of her death.

The murder rumors add a tone of notoriety to her story, while the tributes and accolades remind us that there was much more to her than love affairs and an unexplained death. Both types of publicity tend to escalate her myth, assigning her a permanent place in the annals of Hollywood folklore.