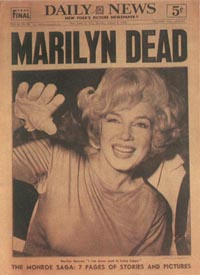 Marilyn's dismissal from Something's Got to Give coincided with a wildly chaotic lifestyle: She dated several men, took dangerous quantities of sleeping pills, and relied on daily visits to Dr. Greenson to see her through each 24-hour period.

It is widely alleged that, sometime during 1962, Marilyn began a relationship with John Kennedy's very married brother, Robert.

The younger Kennedy not only served as Attorney General for the President, but it also seems that he eased Marilyn Monroe out of his older brother's life. Reportedly, JFK's advisers felt that his affair with Marilyn was politically dangerous and encouraged him to break it off.

Speculation on Marilyn's affair with Robert Kennedy is based on numerous eyewitness reports of their meetings together, particularly at Peter Lawford's beachfront home in Malibu. However, specific facts regarding their relationship are even more scarce than those involving Marilyn and JFK.

Details conflict and versions of the same anecdotes are contradictory. Some biographers maintain that Marilyn met RFK at one of Lawford's dinner parties in 1961, while others suggest she was introduced to him at the New York birthday bash in May 1962.

What does remain difficult to discount is that Marilyn made repeated phone calls to the Justice Department -- where Attorney General Robert Kennedy worked -- shortly after she was fired by Fox.

At this point, the speculation takes a decidedly unbelievable turn. In the summer of 1962, Robert Kennedy and/or his advisers supposedly concluded that his involvement with Marilyn -- like his brother's -- was potentially dangerous.

Their decision was based not only on Marilyn's perilous mental state but also on the knowledge that organized crime figures were determined to ruin RFK.

As Attorney General, Kennedy had gone after such top mobsters as Sam Giancana and such Mafia-connected union leaders as Jimmy Hoffa. Both of these men vowed publicly and privately to destroy the younger Kennedy.

Some evidence suggests that Marilyn's house was bugged in the weeks before her death and that the actress herself knew about it.

Many have speculated that certain organized crime leaders -- eager to catch Robert Kennedy literally with his pants down -- were responsible for the wiretaps in Marilyn's home.

Whatever the true facts, RFK apparently called off the relationship a short time after Marilyn's dismissal from Fox.

The last few days of Marilyn's life have been detailed many times in often-contradictory accounts.

Desperate attempts to reach Robert Kennedy by phone are coupled with news that Twentieth Century-Fox may call her back to complete Something's Got to Give; rumors of her endlessly drugged state are mingled with discussions about her plans to decorate her new home; reports of her lack of interest in her physical appearance are belied by the personal satisfaction she felt in Bert Stern's photographic session with

On August 4, 1962, Marilyn spent the morning talking with her publicist, Pat Newcomb, and the rest of the day making phone calls to her friends. Dr. Greenson visited her for a short time in the early evening.

The number of people who claim to have talked with Marilyn on her last day is phenomenal -- everyone from Joe DiMaggio, Jr., to Marlon Brando, from Sidney Skolsky to Isidore Miller.

From her bedroom, Marilyn continued to make phone calls into the night. With each call, her speech became more slurred, a reaction that was not unusual for her during this period of heavy sedative use.

Apparently, none of her friends were sufficiently alarmed to have someone check on her. Supposedly, Marilyn called Peter Lawford that evening to say goodbye.

Then, sometime during the night of August 4-5, 1962, Marilyn Monroe died alone, her white phone still clutched in her hand.

Just as the press had hounded Marilyn in life, so they descended upon her in death, photographing her blanketed body as it was moved out of the house, into the ambulance, and away to the morgue. Pat Newcomb lashed out at the reporters for their lack of sensitivity, calling them "vultures."

The publicist may not have been too far off the mark, for one reporter was heard to say, "I'm just as sorry as the next fellow about Marilyn Monroe. But as long as she had to do it, what a break that she did it in August."

Marilyn's death was ruled a "probable suicide." Her funeral took place on August 8, at the Westwood Memorial Park Chapel in Westwood, California.

Arrangements were made by Joe DiMaggio, with the help of Marilyn's half-sister, Berniece Miracle, and Marilyn's business manager, Inez Melson. The services were conducted by Rev. A.J. Soldan, who read the 23rd Psalm, the 14th chapter of the Book of John, and excerpts from the 46th and 139th Psalms.

Lee Strasberg delivered a short eulogy, and Judy Garland's "Over the Rainbow" was selected as the music. DiMaggio allowed only a few people to attend the funeral; Marilyn's most recent Hollywood acquaintances were noticeably absent.

Almost immediately, newspapers published rumors involving inconsistencies in accounts of Marilyn's death. An article in the Los Angeles Herald-Examiner related unsubstantiated stories about her body being secretly moved from its place in the morgue.

Another article in the same paper reported on the considerable gaps in the timetable of events from the fateful evening. Friends and colleagues interviewed at the time seemed torn over whether Marilyn had committed suicide or succumbed to an accidental overdose of sleeping pills.

None of the proponents of these theories have uncovered enough evidence to make a credible newspaper story, let alone a legal case.

For all of the hints of mystery surrounding Marilyn's death, the official investigators never felt a need to pursue the case beyond a superficial level. More than likely, there was no crime, only the covering up of unwise relationships.

Some doubt that there was even a suicide, speculating that, on the last night of her life, Marilyn had wanted merely to sleep through her despair, as she had done so many times before. Her mind fuzzied, she simply lost track of the number of sleeping pills she had swallowed.

Perhaps in trying to come to grips with the tragic struggle of Marilyn's life, we have become obsessed with explaining her death. No matter, for any attempt to unmask the truth about her last hours remains futile. Marilyn Monroe took her secrets with her.

For a look at some theories about Marilyn's death, see the next section.