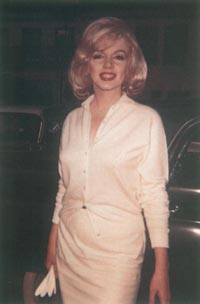 Marilyn has been linked romantically with both Sinatra and JFK.

Sometime after her split with Arthur Miller, Marilyn began dating Frank Sinatra and became an unofficial member of Sinatra's "Rat Pack," that group of show-business cronies with whom the legendary singer maintained close personal and professional ties.

Marilyn had known Sinatra for many years, and some biographers speculate that the two may have enjoyed a relationship years earlier, though no hard evidence exists to support this.

Their friendship was probably renewed during the shooting of The Misfits, when Marilyn was flown to Los Angeles after her breakdown. Supposedly, Sinatra called to inquire about her health and wish her well.

Earlier, he had invited the cast of The Misfits to watch him perform at the Cal-Neva Lodge. Sinatra was in the process of purchasing the lodge, which was located near Lake Tahoe, directly on the border of California and Nevada.

Marilyn would visit the lodge several times over the remaining two years of her life. (The singer would later sell the business, when his link with organized crime was leaked to the press and the public.)

Sinatra gave Marilyn a small white poodle to replace the dog she lost in the divorce with Miller. Marilyn, who always had a spirited sense of humor, called the dog "Maf," which was short for Mafia.

since her starlet days, when he had escorted her to a few Hollywood functions.

Her association with both Sinatra and Lawford undoubtedly brought her into contact with John Kennedy, perhaps as early as July of 1960, when the young senator clinched the Democratic nomination for president. At the time, Lawford was married to Pat Kennedy, JFK's younger sister.

According to some accounts, Marilyn was one of those in attendance at the L.A. Coliseum when John Kennedy made his acceptance speech, and she appeared at the celebration bash at Romanoffs restaurant afterward. There she was introduced to the next President of the United States.

However, a few biographers maintain that she had met Kennedy as far back as 1951, when the two had attended a couple of parties in Los Angeles thrown by agent Charles Feldman; such claims are not substantiated by hard evidence or credible eyewitness accounts.

Lawford's third wife, Deborah Gould, has stated that Kennedy first met Marilyn during the 1960 presidential campaign but that the meeting occurred a few months prior to Kennedy's July nomination.

Whatever the case, it is generally accepted that Marilyn Monroe and John Kennedy were engaged in a love affair throughout 1961, if not earlier. A November 1960 column by Art Buchwald supports these theories.

Titled "Let's Be Firm on Monroe Doctrine," the item read, "Who will be the next ambassador to Monroe? This is one of the many problems President-elect Kennedy will have to work on in January. Obviously you can't leave Monroe adrift. There are too many greedy people eyeing her, and now that Ambassador Miller has left she could flounder around without any direction."

In the next section, you'll learn about Marilyn's final days and untimely death.