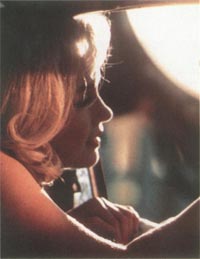 By the end of The Misfits shoot, Marilyn's marriage to Arthur Miller was effectively over. After the film wrapped in early November, the two left for New York in separate planes.

On November 11, she officially announced their separation to columnist Earl Wilson. The press swarmed her New York residence and a tearful Marilyn emerged to confirm the story.

According to one Monroe biographer, newsmen were so eager to get to her that one reporter shoved his microphone into her mouth, chipping one of her teeth in the process.

Marilyn attempted to go into seclusion, but her efforts were thwarted by the announcement of Clark Gable's death on November 16. Gable had had a massive heart attack the day after The Misfits had wrapped, but many had believed he was improving.

His sudden death was a severe blow.

Marilyn took the news so badly that she was unable to make a coherent statement to the press, who kept calling for her comments.

Finally, she managed a brief statement: "This is a great shock to me. I'm deeply sorry. Clark Gable was one of the finest

Rumors began flying that Kay Gable, Clark's young widow who was pregnant with his first child, blamed Marilyn for her husband's death. Kay claimed that the stress Gable had had to endure during the filming of The Misfits, including the daily delays in excessive heat, had led to his heart attack.

Upon hearing this, Marilyn spiraled into a dark depression -- the thought that she had caused the death of the man she had idolized since childhood was too much to bear.

The following May, Kay Gable would invite Marilyn to the christening of Gable's son, John Clark Gable. A grateful Marilyn took the invitation as a sign that Kay no longer held her responsible for any part in her husband's death.

As the winter of 1960-61 deepened, so did Marilyn's feelings of despair and hopelessness. Christmas without Miller or Montand underscored her loneliness, though Joe DiMaggio entered her life once more and renewed their relationship.

A close friendship developed between the former husband and wife, and the press spread rumors of a possible reconciliation.

In January, Marilyn flew to Mexico for a quick divorce from Arthur Miller and then drew up a new will. She made her half-sister Berniece Miracle a major beneficiary, though she had seen Miracle only a few times during her life.

She also made provisions for the care of her mother,and left money to various friends as well as to her secretary, May Reis.

She gave Lee Strasberg and one of her psychiatrists, Dr. Marianne Kris, portions of her estate and also left Strasberg all of her personal effects and clothing.

Sadly, the will is the document of a woman with only the thinnest shred of a family and just a few friends. Most of the latter were not close personal friends, but colleagues, employees, or doctors -- those who had some financial or industry relationship with Marilyn.

In February of 1961, Marilyn entered the Payne-Whitney Clinic in New York at the suggestion of her East Coast psychiatrist, Dr. Kris. From the start, Marilyn was not comfortable at Payne-Whitney.

Surprised at the security precautions, which included barred windows and glass panes in the door so that nurses could glance inside, she rebelled at being treated "like a nut." She felt that the employees at the clinic were checking on her more often than on the other patients because she was a movie star.

She was allowed a limited number of phone calls, which she used to reach Joe DiMaggio in Florida. DiMaggio returned to New York, arranged Marilyn's discharge from Payne-Whitney, and placed her in Columbia-Presbyterian Medical Center.

Upon her release from Columbia three weeks later, reporters and photographers disgraced themselves in an insensitive display outside the hospital's doors. They surrounded Marilyn, screaming tasteless questions and blocking her exit to a waiting limousine.

Sixteen police officers and hospital security men were needed to get her safely to her car. She spent part of the next month in Florida with DiMaggio, who continued to look after her as much as she would allow until her death.

In addition to her precarious emotional and mental health, Marilyn experienced a variety of physical disorders as well. In May 1961, she entered Cedars of Lebanon Hospital in Los Angeles for gynecological surgery.

The following month, she found herself in the Polyclinic Hospital of New York for a gallbladder operation. In addition, Marilyn suffered from an ulcerated colon and abnormal bleeding from the uterus.

Because of her delicate mental and physical conditions, Marilyn did not work as an actress at all in 1961. To learn more about Marilyn's final film, see the next page.