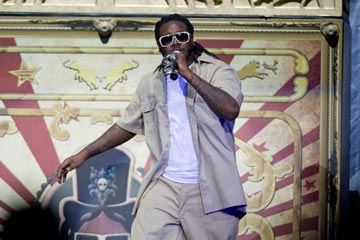 T-Pain is one of the most famous users (or abusers, depending on your outlook) of Auto-Tune.
Joey Foley/FilmMagic/Getty Images

According to Antares, more than 90 percent of its Auto-Tune units are in the hands of hobbyists; amateur musicians and producers looking to smooth out their latest basement recording [source: Matson]. As hundreds of T-Pain copycats began permeating the airwaves, homemade Auto-Tune creations began exploding across the Internet.

One of the most prominent became "Auto-Tune the News," a YouTube series that uses Auto-Tune to turn news clips into pop songs. Produced by Brooklyn soul band the Gregory Brothers, the videos coaxed Auto-Tuned performances out of Barack Obama, Hugo Chavez and even Winston Churchill. Their biggest hit, however, was 2010's "Bed Intruder Song." The brothers took local news footage of Hunstville, Ala., resident Antoine Dodson delivering colorful warnings to a neighborhood intruder and Auto-Tuned it to create a catchy hit that reached No. 89 on the pop charts [source: Peters].

Advertisers also threw their hat into the Auto-Tune ring. In 2009, Wendy's aired their "Frosty Posse" commercial featuring a gang of office workers belting out Auto-Tuned rhymes while break dancing down the street to grab a cup of soft-serve ice cream. Watching the commercial from his Manhattan apartment, rapper Jay-Z suddenly realized that Auto-Tune had finally gone too far.

Enraged by the ad, the rapper soon penned "D.O.A. (Death of Auto-Tune)," a vicious musical attack on the digital craze. "I know we facin' a recession, but the music y'all makin' gonna make it the great depression … get back to rap, you T-Painin' too much." In interviews, Jay-Z claimed Auto-Tune was becoming a musical crutch that was spoiling otherwise good tracks. "I just think in hip-hop, when a trend becomes a gimmick, it's time to move on," he told a Chicago radio station [source: Reid]. Other musicians chimed in with their own Auto-Tune displeasure, most notably Death Cab for Cutie, who showed up to the 2009 Grammys wearing anti-Auto-Tune blue ribbons [source: Cross].

Hildebrand has declared his innocence in the Auto-Tune fight, saying it's akin to blaming General Motors for inventing car crashes. But, in response to Jay-Z, his company did publish a cheeky press release with a picture of an Auto-Tune box declaring "the reports of [its] death have been greatly exaggerated." Despite all the hype, the Cher Effect has never made much money for Antares. Most of its Auto-Tune units continue to be purchased by studios and musicians looking to use the software for its intended purpose: smoothing out the vocals in music tracks.

Even if the Cher Effect disappears entirely from the music world, as long as singers are making mistakes, it looks like Auto-Tune is here to stay.