Batman looks down from a Gotham rooftop into the dark alley below. We hear the sounds of the big city: cars whizzing by, sirens wailing in the distance, indistinguishable voices calling to each other from the street. The Joker and his henchmen enter the alley dragging a helpless Vicki Vale. We hear Vicki's muffled screams, the Joker's evil cackle and the scrape of Vicki's high heels across the pavement.

The movie score swells as Batman dives from the rooftop. We hear the metallic whir of his zip line and his leather cape snapping as it cuts through the air. Then comes the fight -- the punches, grunts, thumps and slams punctuated by blaring horns and sharp percussion from the soundtrack.

On the screen, this scene takes less than a minute. But behind the scenes, professional audio post production engineers worked hundreds of hours to make sure that every snippet of dialogue, every scrape of a shoe, every tiny detail of background noise, every sound effect and every second of the film score are perfectly blended to create a cohesive and powerful cinematic experience.

Audio post-production editors won't ever be famous (they don't even give them speech time at the Oscars), but the work they do is crucial to film and television productions. A screenwriter can come up with the funniest dialogue in the world, but who's laughing if the audience can't hear it? A digital animation team can design dazzling characters and expansive virtual worlds, but often it's the audio details -- the ruffle of the character's clothes, the wind through the digital leaves and the subtle hints of the musical score -- that make the world come alive.

The tools of audio post production can be as low tech as a fist and a sirloin steak (for the most realistic punches) or as high tech as a sprawling mixing console powered by the latest digital editing software.

What are the different roles and responsibilities of an audio post-production team? And how does digital technology help post production engineers do their work faster and better than ever? Read on to find out. 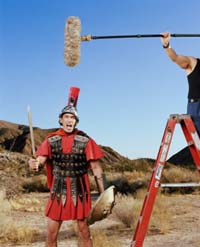 In film and TV, the audio portion of a project is recorded separately from the video. Unlike your home video camera, the film or video cameras used in professional productions don't have built-in microphones. Instead, all dialogue is recorded with either a boom microphone (those long sticks with the fuzzy mics on top) or a tiny, wireless lavalier mic that can be hidden in an actor's clothing. Most other audio -- like ambient background noise and music -- is added in post production.

Post production refers to all the editing, assembling and finalizing of a project once all the scenes have been shot. Audio post production begins once the editors have assembled a locked cut of the project. A locked cut of a film contains all of the visual elements -- selected takes, special effects, transitions, graphics -- that'll appear in a film's final cut.

With the locked cut in hand, the audio post-production staff can start spotting the film for sound. Different members of the post production team look for different things:

If the dialogue editor needs to replace or re-record unusable pieces of dialogue, he'll ask the actors to come in for an automated dialogue replacement (ADR) session. Here, the actors and editors synchronize the newly recorded dialogue with the lip movements on the screen and mix the audio smoothly into the existing recording.

Foley artists -- named after the pioneering audio and effects man Jack Foley -- use an eclectic bag of tricks to reproduce common sounds (a wooden chair for a creaky floor, cellophane for a crackling fire, a pile of audio tape for a field of grass, et cetera) [source: The Art of Foley].

Sound designers and effects editors spend much of their time collecting libraries of ambient natural sounds. They record the sound of Monday morning traffic and save it as a digital file for later use. They record washing machines running, children playing and crowds cheering. You can also buy ready-made libraries with all of these sounds. But some of the best sound designers like to create entirely original effects.

Ben Burtt, sound effects designer on the original Star Wars movies, used a distorted elephant bellow for the roar of a tie fighter. And the famous hum of the lightsaber? A blend of TV static and a 35mm projector [source: FilmSound.org].

The most important job in audio post production is the mix, where all of the sound elements of a project are balanced and blended together. Typically, this job is shared by a dialogue mixer, effects mixer and a music mixer [source: FilmSound.org]. The final copy of the composite soundtrack is delivered either on optical film stock, as a digital file or both.

Now let's look at some of the systems and software used in audio post production. 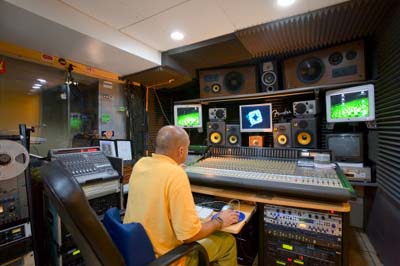 For more information on audio post production and related topics, check out the links on the next page.