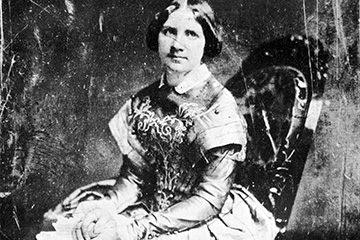 The "Swedish Nightingale" Jenny Lind entered a lucrative contract with Barnum despite her general distaste for America's masses.
The Print Collector/Print Collector/Getty Images

While in England in 1844, Barnum and Stratton were invited to Buckingham Palace, where Stratton charmed Queen Victoria and Prince Albert so well that they were invited back twice. Barnum described meeting most of the nobility staying in London at that time, including the future King Edward VII, Queen Dowager Adelaide, King Leopold of Belgium, the king of Saxony and Ibrahim Pasha of Egypt. They then traveled to France and met King Louis Philippe.

While Barnum was in Europe, he heard of Swedish opera singer Jenny Lind. Although he never had the opportunity to hear her in person, Barnum was convinced he could profit off of her if he could convince her to come to America. Not only would she draw in crowds, but she would help legitimize him in the eyes of the public as something more than provider of cheap humbug.

To entice her, Barnum offered Lind the astronomical sum of $1,000 per performance. This was a major risk even for Barnum, but it paid off in a profit of more than half a million dollars [source: Biography]. The "Swedish Nightingale" arrived in America in 1850 and, thanks to Barnum's promotion, was an instant celebrity: Crowds thronged to her in the streets, and ladies imitated her fashions. Once, she allegedly dropped her shawl amid a frenzied crowd that quickly tore it apart [source: Saxon].

Barnum crafted Lind's reputation as a sweet, unpretentious and innocent angel, when, in reality, she looked down on the uncultured American masses who came to hear her sing, she had strong opinions about certain ethnicities and she could be a difficult person to work with. Barnum knew how to spin the media, however, and gave them what they wanted wherever they happened to be — even squashing rumors in the South that she was an abolitionist [source: Saxon].

After her contract was up in 1851, Barnum and Lind parted ways.

When Barnum first published his autobiography in 1854, it sold well but was met with criticism. The British Examiner wrote, "Its dullness, its conceited coarseness, and the disgusting way in which it glories in shameless frauds upon the public, have astonished us" [source: Kunhardt]. The showman went on to revise and update his autobiography, toning down his boastfulness and defending his practices.