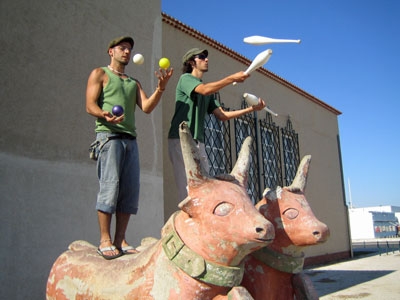 Juggling involves the repeated tossing and catching of three or more objects. Find out how juggling works and learn how to juggle multiple objects.
Photo courtesy stock.xchng

The art of juggling has entertained audiences and challenged jugglers for thousands of years. Although it was once confined to vaudeville and music halls, today you can watch juggling competitions on television and see jugglers keep seemingly endless numbers of objects aloft. The term is not exclusive to objects thrown in the air, though. Everything from plate spinning to playing with devil sticks falls under the umbrella of juggling. In fact, you could define juggling as using feats of dexterity to manipulate one or more objects.

Most people tend to think of toss juggling when they hear the word "juggle." Toss juggling means the performer is throwing and catching at least one object more than the number of hands he's using. In other words, you can juggle two objects with one hand, but if you use both hands to juggle two objects, you're really just playing catch with yourself.

In this article, we'll primarily concentrate on toss juggling. We'll have a quick lesson on how to juggle three objects and look at the patterns almost all juggling sequences are based upon. We'll also look into the science behind juggling, including a glimpse into the surprisingly complex mathematical theories behind throwing stuff into the air and not letting it drop.