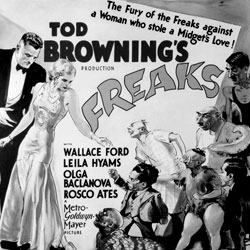 The golden age of American and European freak shows -- traveling exhibitions and carnival attractions, often of disabled or disfigured entertainers -- spanned about a century, from roughly 1840 to 1940 [source: Disability Social History Project]. Wildly popular during the apex of the Victorian era, the human curiosities and oddities behind sideshow curtains consistently attracted crowds at traveling circuses, fairgrounds and P.T. Barnum's American Museum in New York. Indeed, Barnum, who would eventually go on to host to first Miss America-style beauty pageant in 1854, made his mark as the founder of the freak show [source: Thomson]. He and his British counterpart Tom Norman, who discovered the Elephant Man, charged customers to view bearded ladies, conjoined twins, little people and other social outcasts.

Contemporary disability studies explain the appeal of freak shows as a way of indulging in cultural and social violations, such paying to leer at a morbidly obese person, and reinforcing social norms by showcasing the abnormal [source: Craton]. At the same time, a number of freak show stars wielded their disabilities to earn a healthy income and garner publicity and fame, which some scholars interpret as success stories for the time [source: Thomson]. For female freaks in particular, their presence on stage marked a distinct breach of Victorian mores. In an era when women were expected to stay close to the hearth and home, the following 10 females who took to the stage to sell their "born" deformities (i.e. surplus limbs) and "made" physical embellishments (i.e. tattoos) were particularly compelling -- and taboo.