Feejee Mermaid, Tom Thumb and the Art of Humbug 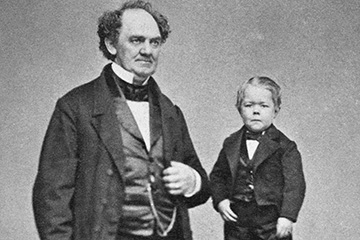 In his autobiography, Barnum takes pride in his success but writes with slight embarrassment about his shameless, deceitful promotion tactics — his so-called "humbug." He writes it off as "the world's way" however, and defends himself by saying that if his advertising was "more audacious" than his competitors', "it was not because I had less scruple than they, but more energy, far more ingenuity, and a better foundation for such promises" [source: Barnum].

The "Feejee Mermaid," appearing in 1842, was arguably Barnum's biggest humbug. For this, Barnum sought out the help of Levi Lyman, an old colleague who worked with him while promoting Joice Heth. Lyman posed as Dr. J. Griffin, a naturalist who worked for the British Lyceum of Natural History (which didn't exist). Then, Barnum wrote letters under assumed names touting Dr. Griffin and his amazing "Feejee Mermaid." He sent the letters to friends in Alabama, South Carolina and Washington, D.C., asking them to mail the letters to New York newspapers [source: Daly]. Crowds flocked to Barnum's museum to see the spectacle — which was really just the head of a baboon attached to the torso of an orangutan, all of which was stuck to the tail of a large fish.

That same year, Barnum met 4-year-old Charles S. Stratton. The little person, who stopped growing at 24 inches, would become Barnum's biggest attraction. Barnum paid Stratton's gullible parents a modest sum for a one-year contract [source: Harris]. He rebranded Stratton with a name borrowed from British folklore, "General Tom Thumb," and advertised him as an 11-year-old from England. Stratton was so small and charming, and Barnum was so adept at promoting him, that Tom Thumb became a sensation. The next year, he secured another contract for a higher salary and brought Stratton to Europe.