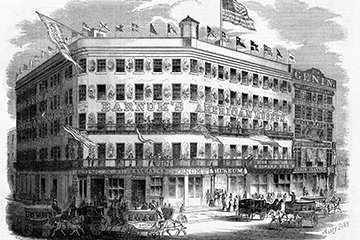 The popularity of Barnum's museum created its own problems: He had to trick people to get them to leave!
Historical/Corbis

Barnum gradually enlarged his permanent collection of "curiosities," but the performances were what really attracted the crowds. Barnum drew from every sort of popular entertainment of the time, including musicians and dancers, jugglers and ventriloquists, giants and little people, trained dogs, automatons, puppet theaters and even American Indians performing ceremonies. Eventually, he featured animals, including grizzly bears, giraffes, orangutans and a rhinoceros. And one of Barnum's most popular exhibits during his early years included a model of Niagara Falls with running water.

Why was his museum so successful while his theater shows had fizzled? Part of the answer has to do with preconceived cultural associations. The theater had a bad reputation, whereas museums were still a place of edification. The respectable people who wouldn't dare be seen entering a theater would fill the American Museum's Lecture Room to see the same entertainment.

Barnum advertised with posters and newspapers (as always), but he also employed creative, unconventional methods to draw crowds in — even by intentionally confusing people. He wrote that he once hired a beggar to walk around the town putting down and picking up bricks with a sober expression on his face. Barnum instructed him to refuse to talk to anyone and then to return to the museum. This behavior puzzled spectators so much that they followed the beggar back to the museum and bought tickets to get in.

Another tactic was to offer free outdoor music. But, of course, there was a catch: Barnum hired the worst musicians he could, which drove people into the museum to escape the music. He wrote, "When people expect to get 'something for nothing' they are sure to be cheated" [source: Barnum].

The museum was soon so successful that crowds would come in droves. This created another problem: People wouldn't leave, but rather packed their own food and planned to stay all day. Barnum didn't have room to bring in more paying customers, so he put in a rear exit and hung a sign that said "This Way to Egress." Many uneducated patrons didn't understand "egress" was a fancy word for "exit." They followed the sign out the door and were told they needed to buy another ticket to get back in.