Joice Heth and Beginning Life as a Showman 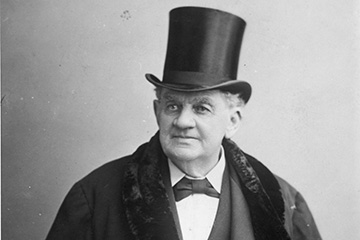 In New York, Barnum started a boarding house and bought interest in a grocery store, but the restless entrepreneur sought something more personally rewarding.

The opportunity came in 1835 when he heard of Joice Heth, a slave woman who not only claimed to be 161 years old but also the nurse to young George Washington. Her owner even claimed to have the bill of sale from Augustine Washington, father of George. Upon hearing that her owner was looking to sell, Barnum travelled to Philadelphia to see her. Heth was blind, toothless and partially paralyzed, but she sang hymns and was a lively talker. Amazed, Barnum negotiated her price down to $1,000 and became a showman.

Barnum only toured with Heth until her death in February 1836, but he managed to make a good deal of money from her. He quickly learned simple ways to drum up interest with advertisements and newspaper copy to get people to "think, and talk, and become curious and excited" [source: Barnum].

But when enthusiasm started to wane, the crafty Barnum got a letter published in the paper that accused Heth of being an automaton — a robot constructed of whalebone, rubber and springs [source: Harris]. Thanks to popular fascination with automatons at the time, the device worked, and attendance increased again. Barnum learned that a showman need not make any promises to get interest. Indeed, inviting doubt can make an exhibitor seem genuine.

When Heth passed away, Barnum made good on a promise to have her body examined by doctors. Looking at the state of her bones, they didn't marvel at her old age, but were instead shocked that this woman was so young, probably no older than 81 [source: Harris]. Nevertheless, Barnum always claimed that he did not fabricate the bill of sale or coach her himself, saying she was on exhibition when he discovered her.

Although the quote is often attributed to him, there's no proof that Barnum ever said, "There's a sucker [or fool] born every minute."