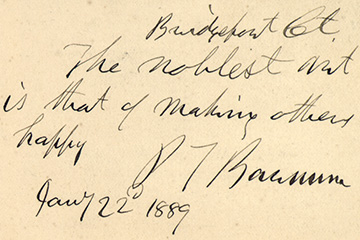 "The noblest art is that of making others happy." -- Or did Barnum just want attention for himself?
Profiles in History/CORBIS

Phineas Taylor Barnum was born in 1810 in Bethel, Connecticut, from firm American roots. His great, great, great grandfather, Thomas Barnum, came to America from England as an indentured servant in the 17th century and eventually became a landowner. However, P.T.'s father, Philo Barnum, was largely unsuccessful. Like his ancestor Thomas, P.T would have to become a self-made man.

P.T.'s maternal grandfather and namesake, Phineas Taylor, was a sharp-witted prankster, what P.T. called a "wag." At P.T.'s baptism, Phineas handed over land to the child. This inheritance, called "Ivy Island," made P.T. the richest kid in town — or so he was always told. But, at the age of 10, P.T.'s illusions of importance shattered when he visited his property. What he found was an "almost inaccessible, worthless bit of barren land" [source: Barnum]. The joke was on him.

P.T.'s father was a farmer, and P.T. grew up doing farm work. He admitted in his autobiography that he hated manual labor, although he would work tirelessly to make money in other endeavors. Eager to leave the farm, he found a more suitable job for himself as a clerk in the local country store. Here, he learned how to barter with customers and discovered that people would often try to cheat him. In his autobiography, he wrote, "There is a great deal to be learned in a country store, and principally this — that sharp trades, tricks, dishonesty and deception are by no means confined to the city" [source: Barnum].

P.T.'s father died when P.T. was just 15 years old, leaving behind debt and four younger siblings to take care of. His mother was forced to get a job, and P.T. moved to the nearby town of Grassy Plain to get another job as a store clerk.