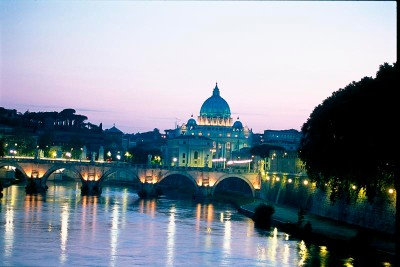 Rome's skyline is dominated the dome of St. Peter's Basilica. Michelangelo wrote of it, "Many believe -- and I believe -- that I have been designated for this work by God."

In his later years, Michelangelo's notorious terribilitá yielded to the gentler traits of his character, though at age 65, he had yet to undertake two of the most influential architectural projects of his career. Michelangelo's plans for the remodeling of the Campidoglio on Capitoline Hill, the political heart of Rome, were groundbreaking in their unifying civic design, even if they were not fully realized until after his death. But it was with his appointment as chief architect of St. Peter's Basilica that Michelangelo reached the height of his architectural career.

With the death of Antonio da Sangallo the Younger -- former assistant of the late master Bramante, the original chief architect of the project -- Pope Paul III commissioned Michelangelo to continue work on the structure. Now in his seventies, failing in health and weak in spirit, the artist rose to the challenge, finding in the responsibility his divine calling to serve his Creator. Refusing to accept payment for the sacred task and braving the hatred of many, Michelangelo drove out the dishonest contractors and corrupt suppliers who had flourished under Sangallo's control. He then set out to create a magnificent and holy monument worthy of God.

Showing both genius and humility in his ability and willingness to complete such an enormous and important work using plans drawn by an elder master, Michelangelo was, in the end, responsible for the grandeur of the building's exterior and the glory of its magnificent dome.

Flagging under the burden of old age and tormented by Vatican officials, Michelangelo nearly abandoned the project and fled to Florence, but he was dissuaded by Vasari and found a renewed sense of purpose in his sacred task. He wrote to his friend, "But if I left Rome, I would feel guilty of dooming St. Peter's to failure, and that would be a great shame and a deadly sin." It is fitting that the crowning achievement of Michelangelo's architectural career is the majestic dome of St. Peter's, a symbol of the church's enduring strength and the crown of the city of Rome.

Michelangelo died on February 18, 1564, after succumbing to a fever. His body was placed in a sarcophagus in the church of Santi Apostoli, but a few days later his nephew Lionardo arrived in Rome to claim the body and transported it to the Florentine church of Santa Croce. According to his wishes, Michelangelo had returned to his beloved Florence for the last time.

The artist's final days were marked by suffering and sorrow as he meditated on his death and prayed for redemption. In two of his last sculptures, both partially shattered and incomplete, Michelangelo chose to revisit the subject of the Pietà. Despite their unfinished state, these works, one of which he was working on until six days before his death, express a deeply moving acceptance of human fragility and mortality.

The theme of greatness born of adversity is common to many powerful and accomplished figures throughout history, and Michelangelo is no exception. His creative frenzy was fueled by a need for acceptance, validation, and forgiveness -- from his family, his patrons, and most importantly, his Creator. A deep divide existed, however, in the artist's psyche underneath his genius, unprecedented acclaim, and unshakable religious faith. This stemmed from his obsessive desire to know the most intimate intricacies of the male human form and that desire's defiance of his religious conviction, resulting in a state of war in the artist's heart and mind.

Fiercely loyal, terrible, and tender, Michelangelo led a life of self-imposed solitude and self-doubt, for he reproached himself for what he craved, berated himself for what he had failed to create, and blamed himself for his perceived inability to attain the absolute ideal of art. His body at times wracked with pain, his eyesight in jeopardy, and his faith pushed to its limits, the artist nevertheless persevered through eight decades to achieve unprecedented success. Little did he realize how well he had succeeded in his divine mission by leaving to future generations a body of work that still inspires in viewers a religious sense of awe.