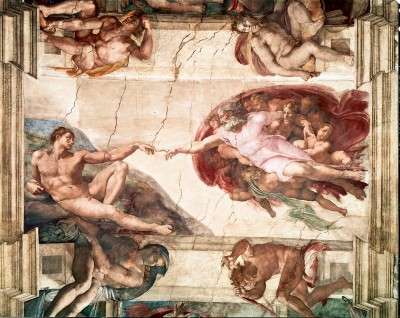 In 1505, shortly after the David was placed at the main entrance to the Palazzo Vecchio, Michelangelo was called to Rome by Pope Julius II. The Warrior Pope had been elected to the papal seat in 1503. Throughout his spectacular ten-year reign, he devoted himself to expelling foreigners, redefining borders, unifying the papal states, and creating a new Rome in accordance with his conception of High Renaissance splendor. It was due in part to the relentless drive of this outrageous pontiff that the High Renaissance progressed in Rome with more urgency and grandeur than it did in Florence.

In this dynamic atmosphere, Michelangelo entered into the service of his first papal patron. Commissioned by Julius II to create a tomb for him of unparalleled power and grandeur, Michelangelo could not have foreseen that the tomb would become a forty-year nightmare.

Abandoning all other projects, Michelangelo created several drawings for the structure. The final version had a structure three stories high and included forty sculptures. The artist endured a draining year finding and moving marble from Carrara, but the Pope stopped work on the tomb. This might have been due to a shortage of funds, though no proof of that exists today.

In a rage, Michelangelo retreated to Florence, where he resumed work on other commissions. But he never forgot the dismissive and discourteous manner in which he had been treated by Julius II. Though Julius II was one of Michelangelo's most important patrons, the relationship between the two men was difficult. The explosive and unyielding artist was ferocious in his dealings with his patrons, both papal and secular, and he regarded them with neither fear nor favor.

In the end, however, the two men found common ground in the basic respect each had for the other: For Michelangelo, the respect was founded on his deeply held religious beliefs and his reverence for the will of the church. For the Pope, it stemmed from his admiration for the incomparable genius of the Florentine master.

History would again bind the two men together when, in 1508, Michelangelo was called to Rome by Julius II. The artist reluctantly accepted the commission to create frescoes for the ceiling of the Sistine Chapel. What began as Julius II's plan for paintings of the twelve apostles gave way to disagreements about the design, content, and scale of the project. Michelangelo, eventually given free rein, enlarged the project to include more than 300 figures, including prophets and sibyls and ignudi (nude figures), decorative medallions, thirteen scenes from the Old Testament, and sixteen lunettes of the ancestry of Christ.

Aided by theological advisor Marco Vigerio, a fellow Florentine and a cardinal trusted by the Pope, and several laborers, the artist began work on the ceiling. He was unhappy, however, with how the work was progressing. By the end of 1508, he had fired all his assistants, removed what little work had been done, and began the difficult process on his own.

Michelangelo had never considered himself a painter, and over the next three years he grew increasingly resentful of the project. Through his faith, however, he remained dedicated to its sacred vision. It was only as his work on the ceiling was almost completed that Michelangelo, under pressure from the Pope and having worked himself to exhaustion, no longer regretted that the frescoes had been forced upon him.

At a deeper level, the artist realized that this single project had allowed him to show his genius not only in painting but also in architecture and sculpture. The architect had skillfully divided the space to its most effective use, the sculptor had employed his understanding of the expressive power of the human body. And the painter had brought to life, through color, line, and compositional relationships, the majestic works of the Creator. The ceiling was unveiled in October 1512, but the artist was hardly able to celebrate his triumph. Only four months later, Pope Julius II died, and Michelangelo once again retreated to Florence.

For four decades, and under constant harassment from the Pope's heirs, Michelangelo worked on Julius II's tomb. Though the project was continually interrupted, Michelangelo's genius was not wasted, for elements from his early plans for the tomb found their way into his massive frescoes on the Sistine ceiling.

In turn, his work on the ceiling would serve as inspiration for the daring sculptural style that would characterize the final version of the tomb. The plans for the monument marked the first time Michelangelo combined architecture and sculpted figures. Finally, in 1545, the tomb was completed on a reduced scale with the powerful Moses serving as a commanding centerpiece.

Michelangelo's conflicts were not limited to his relationship with Pope Julius II. See the next section of this article for more about his conflicts with politics and religion.