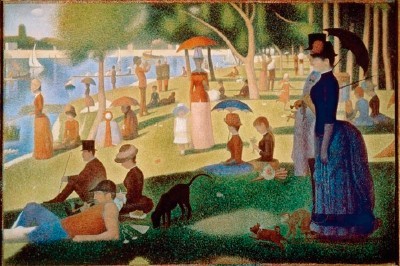 Sunday Afternoon on the Island of the Grand-Jatte  (1884-1886) by Georges Seurat. See more pictures of Impressionist paintings.

Impressionism is a term that came to designate the work of a diverse circle of artists who shared a desire for artistic independence and an allegiance to modern expression. Formed in the last quarter of the 19th century, this small, diverse group included Claude Monet, Pierre-Auguste Renoir, Hilaire-Germain-Edgar Degas, Berthe Morisot, Paul Cézanne, and Camille Pissarro.

Over the span of 12 years (1874-1886) these artists mounted eight exhibitions, and although they quickly became known as the Impressionists, they never adopted an official name. Their Impressionist styles remained distinctive and diverse, but they shared common goals in their rejection of traditional academic ideals and their support of a modernist vision based on the experience of visual sensations and a personal point of view.

The following links provide rich, colorful images and detailed descriptions of the world's best-known Impressionist paintings. Explore the artwork of the original Impressionist circle, as well as beautiful paintings by Impressionist artists who followed in their footsteps.

The Banks of the Oise by Charles-François Daubigny

Charles-François Daubigny painted this Impressionist landscape in the fresh, open air. See his vision of The Banks of the Oise.

Gustave Courbet created Impressionist paintings of his own life experiences rather than images of history or mythology. Take a peek into Gustave Courbet's life and paintings.

The Gleaners by Jean-François Millet

The Gleaners is an Impressionist painting of farm workers laboring in a rural landscape. See how Jean-François Millet's approach was both naturalistic and romantic.

Henri Fantin-Latour included images of Impressionist artists in his paintings, such as Edouard Manet and Claude Monet. Explore beautiful images of these paintings here.

Gustave Caillebotte provided glimpses of Parisian life with his Impressionist paintings. Get swept away to the streets of Paris through these breathtaking images.

Eugene Boudin's La Plage de Trouville is an Impressionist painting that portrays tourists on a beach resort. Catch a glimpse of the seaside through Eugene Boudin's eyes.

Alfred Sisley was a dedicated plein air Impressionist painter. In this article, take a look at some of the landscapes painted by Alfred Sisley.

Much of Odilon Redon's work in the last Impressionist exhibition was done in charcoal on paper, such as the piece entitled Profil de Lumiere. See this mysterious and stunning piece of art in this article.

The Talisman by Paul Sérusier

Paul Sérusier used color and intense hues in an imaginative way, shown in his Impressionist painting The Talisman. Get inspired by Paul Sérusier's unique approach to Impressionism.

Scenes of Parisian nightlife were often the subject of Impressionist paintings by Henri de Toulouse-Lautrec. Visit Parisian cafés, circuses, and cabarets through these images.

Madeleine in the Bois d'Amour by Emile Bernard

This Impressionist painting by Emile Bernard shows his sister resting by a river. View the scene in Madeleine in the Bois d'Amour.

Banks of the Seine by Stanislas Lepine

Stanislas Lepine painted a serene view of the river in his Impressionist painting Banks of the Seine. Get lost in the relaxing reflections on the water displayed in this painting.

Jean-Baptiste Armand Guillaumin's Setting Sun at Ivry depicts both nature and industry in an Impressionist style. Check out this article to see his image of a modern landscape.