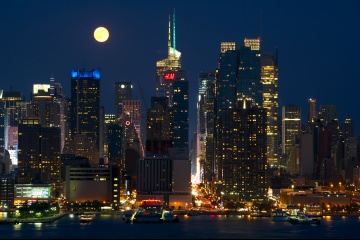 An aerial shot of a skyline, like this one of midtown Manhattan, can help establish time of day, season and setting.
Robert Barnes/Moment Mobile/Getty Images

The establishing shot can be used to provide viewers with a wealth of information, from setting to time of day. When applied before an interior scene, an establishing shot of the outside of a building lets viewers know where the indoor scenes take place, which can make a big difference in certain stories. An aerial establishing shot of the Manhattan skyline makes the audience believe the story is set in New York, even if the entire production took place on an LA soundstage. This type of technique has also been used to transport viewers to ancient Egypt, Imperial China and every other corner of the globe.

An establishing shot of a bitter snowstorm lets the audience know that the movie takes place during the winter, while one that focuses on brilliantly colored trees lets viewers know the scene is set in autumn.

In addition to establishing the season, these shots also work well for films that move between different time periods. Picture a film set in the modern era, with flashbacks to the medieval period. An establishing shot of a green landscape, complete with a castle or two, reveals that the following scene is set in an earlier century. The next scene could start with an establishing shot of a major urban center, which brings the audience back to the present and prevents confusion.

This technique also helps filmmakers establish viewpoint by displaying different characters or elements in relation to one another. What would a classic murder scene be without an establishing shot showing where each member of the party was seated before the lights mysteriously went out and someone wound up dead?

Establishing shots can also be inserted at the end of a scene to great effect, though they may be referred to as re-establishing shots when used in this manner. Imagine, for instance, a scene where a single character's face fills the screen. When the camera pulls out, we discover a bloody corpse at his feet and blood splattered on the walls -- shocking the audience with a single shot.

Now that you understand the basic principles behind this common film technique, let's discover some classic examples of the establishing shot in some of Hollywood's most legendary films.