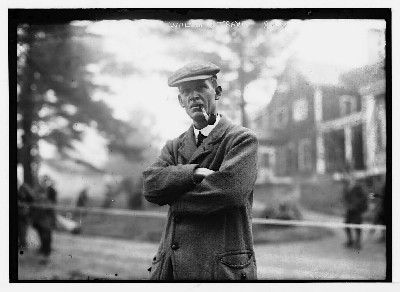 Walter Travis was nicknamed the "Old Man" after taking up golf in his 30s; he was dubbed the "Grand Old Man" in his later years. See more pictures of famous golfers.

Walter Travis didn't even play golf until he was 35 years old, but he became one of the top figures in American golf at the start of the 20th century and was the first player from America to win the British Amateur.

Travis was actually born in Australia in 1862, but his family moved to the States when he was a boy. He didn't take up golf until 1897, but he caught on quickly -- he reached the semifinals of the U.S. Amateur one year later.

Looking for another world to conquer, Travis decided to enter the 1904 British Amateur at Royal St. George's. He beat such top players as Harold Hilton and Horace Hutchinson on the way to the final, where he squared off against long-hitting Edward Blackwell.

Travis was a short hitter, but he was deadly accurate and an outstanding putter. Those attributes carried him to a 4 & 3 victory. The win was not a popular one among his British hosts, who were put off by Travis's gruff manner. Travis, for his part, felt he had been given an unfriendly welcome. A few months later, the center-shafted Schenectady putter used by Travis in his victory was banned in Britain, though not in America.

Travis also made contributions to the game in other areas. He founded The American Golfer magazine in 1908 and served as its editor for many years. He became involved in designing courses, including Garden City Golf Club on Long Island and Westchester Country Club just north of New York City.