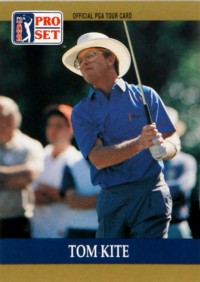 Tom Kite views golf more as a recreation than an occupation. See more pictures of the best golfers.

Consistency has always been the hallmark of Tom Kite's game. From week to week and year to year, his performance has seldom wavered. His reward is more than $9 million in PGA Tour earnings.

Kite came out of Austin, Texas, a year ahead of Ben Crenshaw (they shared the same teacher, Harvey Penick, and also shared the 1972 NCAA Championship).

Kite joined the PGA Tour in 1973 and established a pattern by making 31 of 34 cuts. While a steady money earner, it took Kite a while to become a winner, with just two victories through 1980.

Kite's breakthrough year came in 1981, even though he won only one tournament. He had a phenomenal 21 top-10 finishes in 26 starts, led the money list, and won the first of two consecutive Vardon Trophies.

For much of his career, Kite's only shortcoming was his inability to win a major championship. He finally earned his first in the 1992 U.S. Open, where he shot an even-par 72 on Sunday at Pebble Beach when most contenders were being blown away by severe winds.

At a slender 5'8'', Kite isn't able to overpower courses, though he gets more distance off the tee than his frame might suggest. He has an excellent short game and for much of his career was one of the top putters, but he has struggled on the greens in recent years.

While he has earned nearly $10 million in a quarter-century on Tour, Kite views golf more as a recreation than an occupation. "Golf has never been work for me," he said. "You don't work golf. You play it."