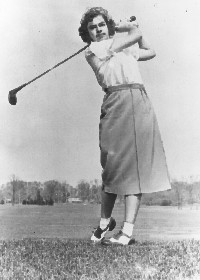 Betsy Rawls didn't hit the ball long off the tee but was more than accurate with her irons. See more pictures of the best golfers.

Undoubtedly the best golfer in history to graduate from college Phi Beta Kappa with a degree in physics and math, Betsy Rawls won 55 events in her LPGA Tour career. Four of those came in the U.S. Women's Open, a record she shares with Mickey Wright.

Rawls started playing golf when she was 17. Four years later, in 1949, she won the first of two straight Texas Amateur titles.

After completing her studies at the University of Texas, Rawls decided her future was in professional golf, even though the LPGA Tour was just getting off the ground and purses were low.

Rawls' first victory came in the 1951 U.S. Women's Open, where she finished five strokes ahead of Louise Suggs.

Jackie Pung was the victim in both of Rawls' next two Women's Open victories. In 1953, Rawls won an 18-hole playoff, 71-77. Pung was an apparent winner in 1957, but she was disqualified for signing an incorrect scorecard, handing the victory to Rawls.

Rawls won her fourth Open in 1960 thanks largely to a third-round 68, which tied the existing 18-hole record.

Not an exceptionally long hitter, Rawls' strength was her touch around the greens. Her career victory total ranks fourth on the all-time LPGA list behind Wright, Kathy Whitworth, and Patty Berg.

After she retired from competition in 1975, Rawls became active in tournament administration. She was the LPGA's tournament director from 1976-81 and then became the executive director of the McDonald's Championship. In 1980, she became the first woman to serve on the rules committee for the men's U.S. Open.

Winning the Green Windbreaker: Inside the Real World of Pro Mini Golf
How Golf Clubs Work
What is the history of golf?