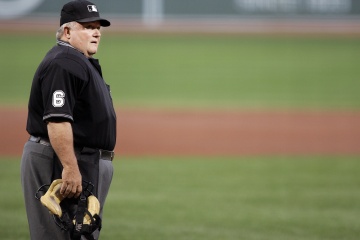 Bruce Froemming looks into the stands on Aug. 16, 2006, before he umpires his 5,000th game of his major league career. He joined Hall of Famer Bill Klem as the only other umpire to reach that milestone.
Credit: © Adam Hunger/Reuters/Corbis

All across the country, thousands of men and women umpire games from Little League to college. Those that want a whack at the big time have to stand tall and travel down a road often difficult to transverse.

Most major league umpires start out in the backwaters of the game, spending their summer evenings and weekends refereeing myriad youth, softball, high school and recreational leagues. The rules and steps for becoming an umpire are different for each rung on the ladder. Most leagues offer training courses. Would-be umpires join associations, which require the novice to become "certified," a needed designation if a person wants to umpire eventually at the highest levels [source: Vulcan].

As for Major League Baseball umpires, they have to attend school to learn their trade (really, they do). There are three schools for umpires in the United States, where prospective umps learn how to handle themselves in game situations. They study the rules, mechanics and even the philosophy of umpiring [source: Major League Baseball]. (I came up empty when I attempted to find whether Plato mentioned anything in his dialogues about calling balls and strikes.)

The top graduates — about 16 percent — ultimately find work in the minor leagues. Major League Baseball doesn't start considering hiring an umpire until he gets to Triple A, the pinnacle of the minors. That's because openings in "The Show" are few. There are 68 umpires in the majors and 225 in the minors. Most spend, on average, eight to 12 years in the low-paying minors before they earn their way to major leagues [source: Major League Baseball].

When "the call" comes, the umpire has to be ready. Sometimes they are, other times not so much.