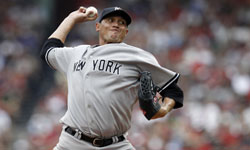 Pitcher Freddy Garcia of the New York Yankees winds up during a game against the Boston Red Sox, on July 7, 2012.
Winslow Townson/Getty Images

Ask some baseball fans what they love about the game and you'll get a lot of different answers: home runs, exciting defensive plays, managing match-ups, or just the moderate pace and summer atmosphere of a game. Long-time fans will tell you, however, that baseball boils down to the showdown between the pitcher and the batter. It's a one-on-one confrontation filled with tension. Can the pitcher throw an accurate, but difficult-to-hit pitch? Can the batter connect and get a base hit, or even knock one out of the park? There's psychology and strategy, history and technique, luck and skill, all within a span of 60 and a half feet (18.4 meters) and happening at about 90 miles (145 kilometers) per hour.

The pitcher isn't just trying to fire fastball after fastball over the plate, though. With an arsenal of different pitches at his disposal, the pitcher's goal is to outwit the batter. It's a mental contest as much as a physical one. There are a lot of variables to account for, like runners on base, the score, how many outs there are, what inning it is, how many pitches you've thrown today, whether the batter is a lefty or a righty, how well the batter is known to hit certain types of pitches, what pitches you've been throwing well today, even where the batter is standing right now in the batter's box. Luckily, your catcher will be helping out and signalling which pitch he thinks you should throw next (he has the best view in the ballpark, after all), but you have the final say, and that's still a lot to take in when you're on the mound, fans are yelling and your teammates are counting on you to deliver. It's probably a good idea to learn some strategy ahead of time.

Luckily, if you're a young pitcher trying to work all this stuff out, you're not alone. Baseball is well over 100 years old, and old-timers through the ages have discussed and written about pitching strategies. There's a lot of expertise on the subject to draw from.

5: Get the First Out

This may seem like painfully obvious advice, to the point of being useless -- get the first batter of each inning out. It's like saying, "The key to pitching well is to pitch well." The key here is the emphasis on the first out. Obviously, you want to keep every batter from getting on base, but that first one? That's the important one. That sets up your whole inning.

If the first batter of the inning does get on base, the offense has more options. Sacrifice plays can be used to advance the runner. The offense is less vulnerable to a double-play (they can still happen, of course, but it won't end the inning). The threat of a home run becomes much larger. So when that leadoff batter comes up to the plate, it's really time to focus. Throw strikes and make sure you don't walk him.

4: Get Ahead in the Count 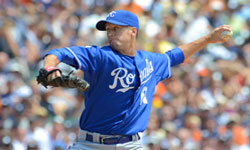 3: Learn to Deal with Your Bad Stuff

Any fool can win a poker hand with a royal flush; good poker players know how to win with lousy hands. This is true of pitchers, too. If you've been pitching for a while, you'll know that some days you feel great. Your fastballs are rockets, your curveballs break just where you want them, you can pick your spots at the corners of the strike zone at will. Some days, you can tell something's off. You throw lots of wild pitches, your fastball feels weak, you're unconfident that you can even find the strike zone. Some pitchers refer to these kinds of pitching days as "good stuff" and "bad stuff."

As a young pitcher, you're probably going to have more bad stuff than good. That's not the end of the world, it's just part of your development as a pitcher. Even pros have bad stuff. They don't flee the mound, they fight through it. You've got to do the same.

If you're having an off day on the mound, that's when it's really time to focus. It's the perfect time to use the other strategies in this article, because you're not going to beat the batters with raw skill. Forget about bad pitches you threw in the early innings. Focus on one batter at a time – set him up, use your defense when you can, then move on to the next batter. Focus on each individual pitch, and don't worry about throwing a perfect pitch. Pros don't throw perfect pitches. Shoot for good pitches.

One thing you can do when your fastball isn't so fast is to adjust and throw a bit lower. Most batters love a high pitch over the plate, but if you keep them low, batters will tend to hit more infield ground balls that your defense can turn into outs.

2: Pitch to Your Strengths 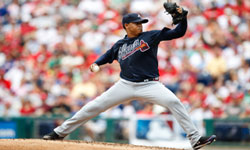 Pitcher Jair Jurrjens of the Atlanta Braves prepares to throw during a game against the Philadelphia Phillies on July 8, 2012.
Brian Garfinkel/Getty Images

With so much going on and so many factors to consider, it's easy to overthink pitching. There's one strategy you should fall back on whenever you're in a tough spot. Behind on the count, or in a jam with runners on base and no outs? Worried about giving up the winning run, concerned about a stolen base, desperate to stay in the game? Just throw your best pitch [source: Wynn].

Regardless of the situation, or what this particular batter hits best, if you're not sure what to throw, go with your strongest weapon. This can change from game to game for you, but if your fastball is hot that day, blister one over the plate. If your curveball is breaking just right, or your sinking fastball is nosediving right past batters, throw that.

You might notice that this strategy contradicts some of the other strategies in this article. It turns out the real advice here is, "Pitching is a discipline that requires a lot of thought. Just don't think about it too much."

If there's a single, overriding, all-encompassing Golden Rule of pitching, it's this: Never be predictable. This supersedes every other rule, strategy, guideline or piece of advice. For instance, you never want to throw a ball as the first pitch of an at-bat, but you definitely don't want to throw a fastball every single time either. Batters will sniff out a pattern like that and know what to swing at before you ever start your windup. Don't alternate pitches either (fastball, curveball, fastball, curveball). Your advantage in the pitcher/batter showdown lies in the batter's uncertainty. You've got to keep him guessing.

There's a specific pitch that perfectly exemplifies this strategy – the changeup. A changeup is a pitch that looks just like a fastball from the windup through the release, but it's about 15 to 20 miles (24 to 32 kilometers) per hour slower. It's accomplished by making a small mechanical adjustment to the throw, like reducing the stride, not pushing off the rubber as hard, or holding the ball with an extra finger to increase friction [source: Schlossberg]. The point of the changeup is not that it's a 75 mile (120-kilometer) per hour pitch; it's that the batter is expecting a 90 mile (185-kilometer) per hour pitch. That's a huge part of pitching strategy – set the batter up to think you'll do one thing, then do something else.

I've been a hockey fan most of my life, and didn't start following baseball until two or three years before I wrote this article. It can be intimidating to write something like this when you know there's a deep well of experience and a dedicated fan base that's spent decades thinking (and writing) about it. I actually learned a lot while researching this, and I feel like I'm even more of a fan now than I was when I started writing it.