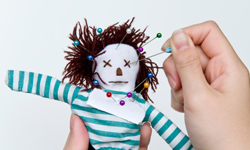 Voodoo dolls? Nah, baseball has come up with much more creative ways to curse people.
iStockphoto/Thinkstock

There are curses in every culture. Ancient Egyptian priests trampled and melted wax effigies of the chaos serpent Apophis to curse his name. The biblical figure Noah cursed his own son, Ham, after the young man unwittingly discovered his father naked in a drunken stupor. When they wanted to bring evil upon their enemies, Irish pagans muttered curses as they stroked and turned bullaun stones. Voodoo necromancers stuck pins in cloth dolls to make their adversaries suffer. In the 16th century, witches were burned at the stake for allegedly hexing their opponents. Even on American television, teen comedy "The Brady Bunch" featured an episode where the Brady kids discover a cursed Tiki amulet and are befallen by a rash of bad luck.

It's no surprise, then, that baseball has its own rich history of curses. For every inspiring story of an underdog's triumph, there's also a tale of some sinister character who has cast his malocchio (evil eye) upon the sport and cursed a player or even an entire team.

In this article, we'll count down baseball's 10 most legendary curses. Our first curse involves a set of bobblehead figurines and a sports franchise that hasn't won a World Series in more than 25 years.