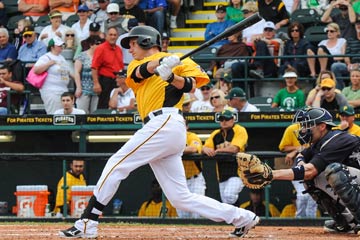 It's late February in Pittsburgh, Penn., with the kind of early morning cold that turns your fingers numb in the 20-second walk from your front door to the car. As your plane takes off from Pittsburgh International Airport, you look down through a blanket of slate gray clouds at the snow-covered tundra below. Good-bye, winter, you smirk. Hello, spring training!

When the cabin door opens in Tampa, Fla., you can smell the ocean on the warm, sticky air. You are in the land of palm trees and white sand beaches and wearing flip-flops to dinner. For six glorious weeks, you will watch your beloved Pittsburgh Pirates play baseball in the cozy confines of McKechnie Field in Bradenton, Fla.

There's a game scheduled every single day from Feb. 22 through March 28 with the exception of two lonely Tuesdays (two doubleheaders more than make up for it) [source: Florida Grapefruit League]. The weather forecast — a breezy 77 degrees Fahrenheit (25 Celsius) and sunny. It's a great day for baseball.

The 2013 spring training season in Florida marked 125 years of professional preseason baseball in America. What began in the late 19th century as a way to get part-time players into shape after the offseason has become a lucrative tourist attraction that brings hundreds of millions of dollars to the Florida and Arizona economies annually.

Spring training is beloved by fans, but has its share of critics among baseball writers and many players themselves. Do today's professional athletes really need six weeks of "tuning up" to get back into playing shape? And do broadcasters and sports journalist really need to camp out in towns like Jupiter, Fla., and Surprise, Ariz., to send back thrilling footage of players stretching in the sun and 1-0 contests between glorified minor leaguers?

Let's start with a look at the reasons why spring training exists in the first place.

The Function of Spring Training 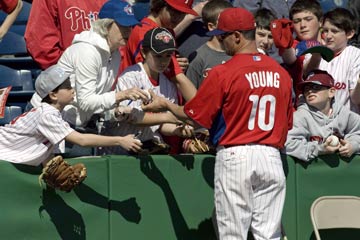 Baseball in the late 19th century was predominately a northern sport with teams clustered in states like New York, Massachusetts, Illinois and Pennsylvania. Most major leaguers were part-time athletes who returned to their day jobs in the offseason. When the new season approached, coaches would train players indoors until the practice fields thawed out.

The Chicago White Stockings and the Cincinnati Red Stockings were the first teams to travel south to New Orleans for spring training camps in 1870 [source: SpringTrainingOnline]. In 1888, the Washington Capitals ran a four-week camp in Jacksonville, Fla., and more teams soon set out for sunnier pastures, making Florida, and eventually Arizona, the premier spring training destinations of the 20th century.

Today, spring training still serves the purpose of getting players into game condition, both physically and mentally. It isn't all just stretching sessions and working on their tans. Both veterans and young hopefuls run intensive conditioning drills and practice tricky scenarios like rundowns, bunts and cutoff plays [source: Kurkjian].

But spring training also serves as a tryout for unproven players. By February, most teams have filled their 25-man roster, but there are still a few spots up for grabs [source: Johns]. Major League Baseball has an extensive Minor League or "farm" system to develop new talent. Some of the top-performing minor leaguers will be called to spring training as "off-roster invitees." If they play well, they could earn a spot in the big leagues. The Minor League has its own shorter spring training in March [source: Cooper].

Arguably the most convincing reason for the existence of spring training is its drawing power as a tourist attraction. Today, spring training is evenly split between the Grapefruit League of Florida and the Cactus League of Arizona with 15 teams each. In 2013, more than 1.6 million fans attended spring training games in Florida for an estimated $753 million boost to the state's economy [source: Florida Grapefruit League]. In 2012, Arizona's Cactus League generated more than $422 million with 58 percent of tickets purchased by out-of-staters [source: FMR Associates]. Spring training baseball is big business for hotels, resorts, restaurants, shops and golf courses in these sun-soaked cities.

Baseball fans love spring training because it's Major League Baseball with a small-town feel. The stadiums are smaller, the ticket prices are cheaper and the players are more accessible for autographs and even conversation. The formality of the game is replaced by a boyish exuberance for the return of an American pastime. Actor Billy Crystal, at age 59, went to bat for the Yankees during a spring training game, and some players ride home from games on their bicycles in full uniform, with their gloves dangling from the handlebars like school kids [source: Kurkjian].

So where can you watch your favorite team up close and personal in spring training?

Florida was the first state to establish itself as a destination for preseason professional baseball in America. Florida became a state in 1845 after a long and bloody conflict to remove the native Seminoles. It wasn't until after the Civil War that the state began to evolve from a swampy wilderness into acres of productive citrus groves and outposts of industry. The first northern tourists began to arrive in the 1870s, attracted to Florida's beautiful weather and pristine beaches [source: Florida Department of State].

The Washington Nationals were the first to set up a spring training camp in Jacksonville in 1888 and played the very first Major League exhibition road game against the New York Giants. After the Nationals went 48-86 in the 1888 season, Florida lost some of its luster as a training destination. It would be 15 years before baseball returned to the Sunshine State [source: Florida Grapefruit League].

In 1913, the mayor of Tampa offered the Chicago Cubs $100 per player to train in Florida [source: Florida Grapefruit League]. By 1914, more teams followed suit, with clubs training in St. Petersburg, St. Augustine, Jacksonville and Tampa. The seeds of the Grapefruit League were officially sown.

Today, there are 15 Major League Baseball teams that call Florida home from late February through mid-March. They represent a mix of American League and National League squads, and all hail from cities east of the Mississippi River except for the Minnesota Twins and the Houston Astros. Although Grapefruit League teams play each other in official exhibition games, there is no Grapefruit League champion.

Here are the teams and their "hometown" Florida locations:

The other half of Major League Baseball attends spring training out west in Arizona.

Chewing gum magnate William Wrigley Jr. bought the Chicago Cubs in the 1920s. Each spring, Wrigley shipped the team to Catalina Island off the California coast (which he also owned). Fans thronged to the "Catalina Cubs" annual migration, particularly since the Cubs won league pennants in 1929, 1932, 1935 and 1938. The practice continued until the 1950s. [source: Catalina Museum].

While most Major League teams flocked to Florida for spring training in the 1940s, the Cleveland Indians' owner Bill Veeck had a different idea. Veeck was no stranger to publicity, having given away live animals at games and staged weddings at home plate. He once sent Eddie Gaedel to bat – at 3 feet 7 inches (1.1 meters) he was too short to strike out. Veeck was also an early innovator, signing the first African-American player, Larry Doby, to the American League in 1947 followed by Negro League star Satchel Paige, the oldest rookie, at age 42 [source: Acocella].

There is no requirement that teams join one league or the other. Sometimes, money is the decision-maker. In 2008, the tiny Arizona town of Goodyear (population 59,548 at the time) lured the Cleveland Indians back from the Sunshine State — they had trained in Winter Haven, Fla. since 1993 — by building a $76 million, 10,000-seat ballpark, partially funded by the local city government [source: Baseball Pilgrimages]. The Cincinnati Reds were so impressed with the plans for the new stadium and extensive "ballpark village," that they relocated to Goodyear, too.

Today, 15 teams compete in the preseason Cactus League. Again, they are a mix of American and National League clubs, and all but two teams — the Chicago White Sox and Chicago Cubs — hail from west of the Mississippi. Here are the teams and the "hometown" Arizona locations:

One advantage for vacationing baseball fans is that Cactus League stadiums are much closer to each other geographically than Florida, so it's possible to catch multiple games in the same day in different Arizona stadiums.

For lots more information about the history and future of America's favorite pastime, check out the related HowStuffWorks links on the next page.

My father-in-law is a baseball junkie, the kind of guy who can watch any random team play any other random team on any given day and find it deeply satisfying. For his 60th birthday, my wife and some of her brothers flew him to Chicago to watch a Cubs home series. My father-in-law is from Idaho where the closest professional baseball team is several hundred miles away. Given his choice of teams to root for, he went for the perennial underdogs, the cursed Cubs, who haven't won a World Series in 104 years. I believe those three days he spent at Wrigley Field with his kids were something akin to heaven on Earth. I'm far from a baseball junkie, but I've recently discovered the charm of a Minor League game — small stadium, close to the action, lots of between-inning shenanigans. If someone bought me a ticket to Tampa to watch a few spring training games, I wouldn't refuse the generosity. Something tells me I might have to wait for my 60th birthday.

How the Physics of Baseball Works
Who Pays if You Get Smacked by a Foul Ball?
10 Legendary Baseball Curses