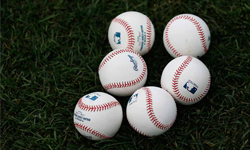 Practice baseballs sit on the field before the start of the Washington Nationals and Atlanta Braves game at Nationals Park on Aug. 20, 2012 in Washington, DC. See more sports pictures.
Rob Carr/Getty Images

Few experiences can capture the essence of summer in the sensory-smorgasbord manner of a baseball game: The rich aroma of roasting peanuts and popcorn (and overpriced beer); the crack of wooden bats and the trill of campy organ music; and of course the visual thrill of being caught up in "the wave" with hundreds of other fans, or watching a humdinger hit soar right into your section of the stands.

What we fans usually don't get to see is baseball's seamy and unseemly underbelly. Long-cherished as "America's pastime," the internationally practiced sport lays claim to a number of less-than-wholesome, outside-the-rulebook traditions. In fact, long before baseball was tarnished by the steroid scandals around the turn of the latest millennium, dishonest players and their enablers have engaged in a slew of questionable activities that affected game outcomes.

Baseball, like any other endeavor, is filled with imperfect human beings, so it's only natural that the sport would have its share of rule breakers. Money, as you might guess, often motivates them. As we all know, winners are paid more money than losers. They get higher salaries, fatter endorsement deals and maybe even a place in the record books. So there's a powerful incentive to reach for any advantage available, even if it means violating the rules everyone else honors.

The steroid era of Paul Bunyon-esque batsmen brought renewed focus on baseball cheating but it perhaps overshadowed some of the lower-tech, time-(dis)honored techniques that don't require pills or a hypodermic syringe. "Juicers," or people who rely on performance-enhancing drugs such as steroids, have a high-tech army of biochemists, doctors, and other brainy people on their side to help them cheat. That's a completely different article by itself. In this piece, we'll focus instead on more traditional baseball cheats -- the old-fashioned, genteel kind of dishonor, if you will.

So grab your contraband snacks purchased outside the stadium and keep your binoculars handy to watch for furtive movements on the field. It's time to play (dirty) ball!