Getting to the Super Bowl 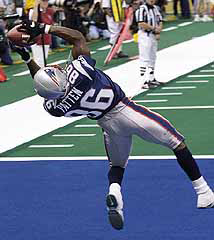 ­ To win the Super Bowl, a team must first make it to the big game. That's no easy task. The first goal of any NFL team is to survive the grueling 16-game regular season schedule with a worthy record. Usually, 10 or more wins are required to make the playoffs, but 10 wins are no guarantee for a playoff berth.

The NFL's structure also has an effect on which teams reach the post season. The NFL consists of two 16-team conferences, the American Football Conference (AFC) and the National Football Conference (NFC), which are subdivided into four four-team divisions (North, South, East, and West). Each division winner earns an automatic trip to the playoffs. In addition, the two non-division winners with the best overall record get in as wild card teams. The playoff teams in each conference are then ranked, or seeded, according to their finish as follows: ­

There are four rounds in the NFL playoffs. Both conferences use the same format. Here is a breakdown of each round: