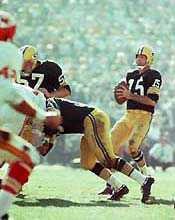 The modern era of professional football began in 1922 when the American Professional Football Association changed its name to the National Football League (NFL). From 1922 to 1932, the team with the best regular season record was crowne­d champion. At the time, the league fluctuated between eight and 18 teams.

The NFL did not implement a post-season until 1933, when the league divided its teams into two five-team divisions and scheduled the first NFL Championship Game. In that first championship game, the Chicago Bears beat the New York Giants 23-21 at Wrigley Field in Chicago. The first Super Bowl wouldn't be played for 34 more years.

The seeds for the Super Bowl were planted in 1960, when a second professional football league formed to compete with the established NFL for players and fans. Although other leagues had come and gone, the eight-team American Football League (AFL) gained fan interest unlike any alternative league before it. What’s more, the AFL had owners with the money to sign players to lucrative contracts.

­The NFL-AFL rivalry became bitter in 1965, when the New York Giants broke an informal agreement between the two leagues not to pursue players already under contract. The Giants signed Pete Gogalak, a kicker still under contract with the AFL's Buffalo Bills. In retaliation, AFL owners targeted the NFL's top quarterbacks and signed seven players before the NFL finally relented under the pressure. When the NFL gave in, the AFL owners nullified the contracts of those seven quarterbacks.

During negotiations to settle the personnel matters between the leagues, a plan formed for the leagues to merge. The leagues agreed to formally merge in 1970, but would play an inter-league world championship game from 1966 to 1969 pitting the best team from each league against each other. This game would come to be known as the Super Bowl. For its first three years, the game was labeled the AFL-NFL World Championship Game; these days the games played under this clunky title are considered Super Bowls I through III.

­­Kansas City Chiefs owner Lamar Hunt is credited with suggesting "Super Bowl" as a moniker for the championship game. Hunt was inspired as he watched his kids play with a Super Ball®, a rubber ball about the size of a tennis ball that was introdu­ced by Wham-O in 1965. Fittingly, Hunt's Chiefs would represent the AFL in the first Super Bowl, but were trounced by the Green Bay Packers 35-10 on January 15, 1967, at the Memorial Coliseum in Los Angeles. Roman numerals were first used in 1971 to indicate the number of the Super Bowl being played. Thus, Super Bowl 5 became Super Bowl V.

In the next section, we'll explain how the NFL playoffs work and how a team gets to the Super Bowl.

Memories are short in the sports world. The creation of the Super Bowl in 1967 created a second-class status for those champions crowned in the years prior to the Super Bowl era. Here is a list of teams that won the most NFL and AFL championships prior to 1967:

*Of the teams listed, only the Packers and Bears have won a Super Bowl.