The Birth of the Modern Torch Relay 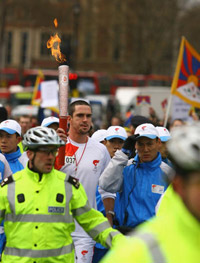 The flame was reintroduced to the Olympics at the 1928 Amsterdam Games. A cauldron was lit, but there was no torch relay.

The first Olympic torch relay was at the 1936 Berlin Summer Games. Carl Diem, a German history professor and Secretary General of the Organizing Committee of the Games introduced the relay as a way of reconnecting the modern Olympics with the Games' historical roots. The flame was lit in Olympia, Greece, just as it had been centuries before. Then it was carried to Berlin, Germany, for the start of the Olympics.

The torch relay was not introduced to the Winter Olympics until the 1952 Games. It was lit that year not in Olympia, Greece, but in Norway, which was chosen because it was the birthplace of skiing. But since the 1964 Olympics at Innsbruck, Austria, every Olympic Games -- Winter and Summer -- has begun with a torch-lighting ceremony in Olympia, Greece, followed by a torch relay to the Olympic stadium.

Next, we'll look at how designers and engineers create an Olympic torch.