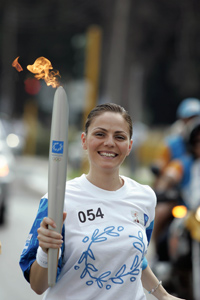 The torch must stay lit the entire length of its journey. It must survive wind, rain, sleet, snow, and a variety of climates (desert, mountain, ocean). The torch must also:

For fuel, early torches burned everything from gunpowder to olive oil. Some torches used a mixture of hexamine (a mixture of formaldehyde and ammonia) and naphthalene (the hydrogen- and carbon-based substance in mothballs) with an igniting liquid. These substances weren't always the most efficient fuel sources, and they were sometimes dangerous. In the 1956 games, the final torch in the relay was lit by magnesium and aluminum, burning chunks of which fell from the torch and seared the runner's arms.

The first liquid fuels were introduced at the 1972 Munich games. Torches since that time have carried liquid fuels -- they are stored under pressure as a liquid, but burn as a gas to produce a flame. Liquid fuel is safe for the runner and can be stored in a lightweight canister.

In the next section, we'll look at how the torch is constructed.