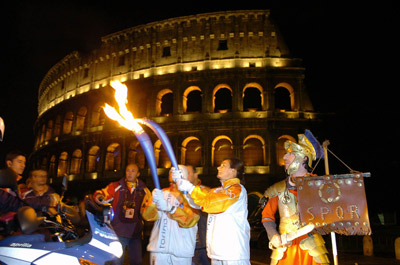 During the 2006 Torino Olympic Torch Relay, a torchbearer passes the flame to a fellow torchbearer.
Photo courtesy http://www.areamediafiamma.it/ Copyright © 2005 Torino 2006 ®

The Olympic Torch Relay begins with the torch lighting in Olympia, Greece. From there, the journey to the host city varies from year to year. The Olympic Games Organizing Committee (OCOG) determines the route, as well as the theme, modes of transportation for the torch, and the stops that it will take along its way to the Opening Ceremony.

The torch is generally carried from one country to another on a plane. Once it arrives in a city, it usually spends one day being carried from torchbearer to torchbearer on foot. It may also be ferried from place to place by car, boat, bicycle, motorcycle, dog sled, horse, or virtually any other type of conveyance.

On certain legs of the relay, the torch must be housed in a special container. For a trip across the Great Barrier Reef before the 2000 Olympic Games, a special torch was designed to burn underwater. On airplanes, where open flames are not allowed, the flame is typically stored in an enclosed lamp, much like a Miner's lamp. At night, it is kept in a special cauldron until the relay begins once again the following day.

Sam Shelton, who created both the 1996 Atlanta torch and the 2002 Salt Lake City torch, examines the Olympic Cauldron that holds the flame at various points during the relay.
Photo courtesy Georgia Institute of Technology Photo by Stanley Leary

As in any relay race, each runner carries the torch for only one short leg of its trip As a runner completes a leg, he lights the torch of the next person in the relay.

Torchbearer Stephanie Stockman, an employee in the NASA Laboratory for Terrestrial Physics in Maryland, passes the flame to the next runner.
Photo courtesy NASA

It is considered a great privilege to be chosen as a torchbearer. Athletes, actors, musicians, sports figures, and politicians have all carried the flame. In 1996, boxing legend Muhammed Ali lit the Olympic cauldron to mark the start of the Games in Atlanta. But the brunt of the running is done by average citizens all around the world.

A torchbearer in the 2004 Olympic Torch Relay lights her torch from the cauldron to begin another day of the relay in Greece.
Photo courtesy ANA

Almost anyone can carry a torch, provided that he is at least 14 years old and is able to carry it for at least 400 meters (437 yards). Handicapped people can be (and have been) torchbearers -- they can carry the torch while riding in a wheelchair. The torchbearers are chosen by the Olympic sponsors and organizers, usually because they have made a significant contribution to their community and because they personify the theme of that particular Olympics. The Olympic sponsors (for example, Coca-Cola) also get to choose several torchbearers from within their organizations.

U.S. President George W. Bush speaks during the Olympic Torch Relay Ceremony at the White House. He announced two torchbearers, Liz Howell and Eric Jones, both of whom were profoundly affected by the Sept. 11 attacks.
Photo courtesy Whitehouse.gov

Each torchbearer is accompanied by a caravan with security personnel, a medical team, the media, and extra torches in case the torch the runner is carrying goes out.

When the competition ends about two weeks later, the flame is extinguished at the Closing Ceremony, marking the end of the Games.

To find out more about the Olympics, the torch, and related topics, check out the links below.