The Lighting of the Olympic Torch 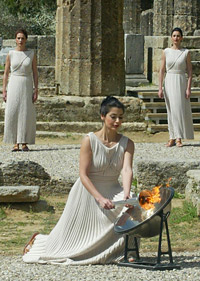 Actress Thaleia Prokopiou ignites the Olympic Flame with the use of a parabolic mirror during a Torch Lighting practice session outside the Temple of Hera in Ancient Olympia, 2004.
Photo courtesy ANA/Orestis Panagiotpu

The Olympic torch is lit several months before the start of the actual games. The flame begins its journey at the site of the original Olympic Games -- Olympia, Greece. It is lit, just as it was in ancient times, at the Temple of Hera.

An actress dressed as a ceremonial priestess, in the robes of the ancient Greeks, lights the torch via the same technique used in the original Games. She uses a parabolic mirror to focus light rays from the sun. The parabolic mirror has a curved shape. When it is held toward the sun, the curvature focuses the rays to a single point. The energy from the sun creates a great deal of heat. The priestess holds a torch in the center of the parabolic mirror, and the heat ignites the fuel in the torch, sparking a flame.

If the sun is not shining on the day of the lighting ceremony, the priestess can light the torch with a flame that was lit on a sunny day before the ceremony.

The flame is carried in a fire pot to an altar in the ancient Olympic stadium, where it is used to light the first runner's torch. For the Winter Games, the relay actually begins at the monument to Pierre de Coubertin (the man who founded the modern Olympic games in 1896), which is located near the stadium.

Then, the relay begins.