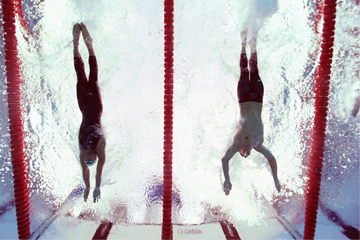 And that is why you need some serious timekeeping technology. Milorad Cavic (L) and Michael Phelps (R) both reach for the wall during the men's 100-meter butterfly final at the 2008 Beijing Summer Olympics. See more Olympic pictures.
Adam Pretty/Getty Images

Olympic timing technology has come a long way in the last century. And thank goodness, as we've seen increasingly more races that have come down to not just the wire, but the itty-bitty strings that make up the wire. Take 2008, when swimmer Michael Phelps finished one-hundredth of a second before competitor Milorad Cavic. The digital evidence taken from a camera recording 100 frames a second was able to confirm that Phelps won the gold by that slimmest of margins [source: iW].

In other words, the days of simple stopwatches at the Olympics are long gone. Today you'll see a selection of high-tech timekeeping devices including high-speed digital cameras, electronic touch pads, infrared beams and radio transmitters, just to name a few.

Courtesy of all that advanced timing technology, Olympic athletes can be measured at one-millionth of a second, or a microsecond -- and note that it takes 300 to 400 microseconds for an eye to blink [source: Lohr]. Thanks to teeny variations in tracks and pools, however, events may only be timed to one-hundredth of a second (swimming) or one-thousandth of a second (track cycling) [source: Park].)

Such accuracy requires first-rate technology, and as of 2014, only two companies in the world meet the standards of the Olympic Committee. Omega has been the official timekeeper of almost every Olympic Games. (Seiko has held the title five times, most recently during the 2002 Salt Lake City Olympic Games.) This title means the company provides technology and personnel for the timing of hundreds of events during the biennial competitions. Because we're talking hundreds of events, we can only look at how Olympic officials time a handful of the really big ones in this article. We'll also check out the mechanics of determining split-second wins and false starts, as well as methods of instant scoring. 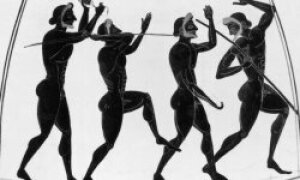