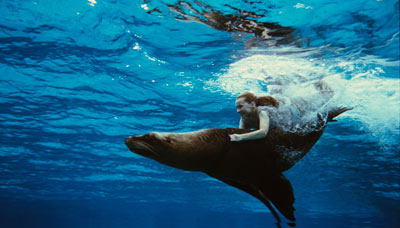 Jodie Foster had a double for a stunt in which she face-planted on some exercise equipment, but she did her other stunts herself. "[It was] a pretty tame shoot, just freezing," she says.

Breslin also had a stunt double for most of a rock-climbing sequence, but she did a lot of running, swimming and zip-lining on her own. She was fairly confident in the water before the shoot but admits that "once I got there I realized I wasn't that good of a swimmer." But that didn't stop her from bravely filming an underwater ride on sea lion Selkie, who wore camouflaged handles for Breslin to hold onto.

The directors say that Breslin was the perfect choice for Nim. "There aren't too many 11-year-olds … who could carry a whole movie on their shoulders," says Levin. "She has the talent and experience to really be the star of a movie."

Native Manhattanite Breslin "was a little afraid of heights, a little scared of stuff when we started rehearsals," says Flackett. "But by the end she had changed. It really brought her confidence up."

Foster was drawn to the girl-power aspect of the film and also wanted to make a movie her sons could see -- her eldest, Charles, had read the book. After dark dramas like "The Brave One" and "Flightplan," she relished the comedic change of pace -- for years, she'd been looking without success for a comedy. So when she read the "Nim's Island" script, she began lobbying and "banging down doors." Co-directors Mark Levin and Jennifer Flackett championed her, but the initial distributor did not. "She had not done comedy in a long time so there was a reticence on the studio level, but we knew she would be brilliant in it," Levin says.

"I'll always be a dramatic actor," Foster says. "I'll do comedies every once in awhile. But it has to touch me in a certain way ... [my] natural humor is sort of dry and nasty -- and kind of R-rated."