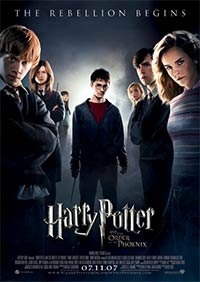 On the eve of the release of the seventh and final book in J.K. Rowling's wildly successful epic series about a certain boy wizard comes the fifth adaptation in the equally phenomenal film franchise, "Harry Potter and the Order of the Phoenix." With new-to-the-series director David Yates behind the camera, directing from a screenplay by Michael Goldenberg, it's darker in tone than previous "Harry Potter" movies but is just fabulous to look at, with several spectacular sequences that posed major creative and technical challenges in bringing them to life on screen.

"Phoenix" finds Harry and his friends Ron and Hermoine in a darker place, dealing with the return of consummately evil Lord Voldemort and the arrival at Hogwarts of a sadistic martinet of a new teacher who makes their lives miserable. Compounding that, Harry -- accused of lying about Voldemort and ostracized for it at the outset -- copes with a much-heightened version of teenage angst.

"It's the most emotional of the stories," opines veteran Potter producer David Heyman. "The actors have grown, not just age-wise but in the depths of their portrayals. We experience both Harry's first screen kiss and some of the pain that comes with that. It's a really moving story full of thrills, adventure, and visual effects and great new characters and creatures. I think we've upped the ante on this one."

Director Yates agrees that "Harry Potter and the Order of the Phoenix" is "more emotional, intense and a bit edgier" than previous versions, citing the "violent and scary" wizard battle at the film's end and a tone-setting scene early on where the aforementioned new instructor, Defense Against the Dark Arts teacher Dolores Umbridge (Imelda Staunton) turns Harry's detention into torture. "It's quite scary and unsettling. It's magical but it feels very uncomfortable," Yates describes.

Imelda Staunton as Dolores Umbridge in Warner Bros. Pictures' fantasy "Harry Potter and the Order of the Phoenix."

In this article, we'll look at the many creative, logistic and technical challenges of filming this movie and learn how the filmmakers overcame those challenges.

Best known for directing award-winning British TV productions like "State of Play" and "The Girl in the Café," Yates hadn't read the Harry Potter books or worked with special effects before he got called for the job previously filled by Chris Columbus (twice), David Newell and Alfonso Cuarón.

"He’s very good at making everything feel very real and that was very important for us because the world itself is very magical but this story is about the beginning of a rebellion, and we wanted someone who’d handle that with great verisimilitude and reality,” Heyman said, explaining the choice of Yates. “And he’s a great director of actors,” he adds. “The kids love him. That’s really important.”

Yates returns the sentiment, considering the chance to work with his young cast "the biggest treat."