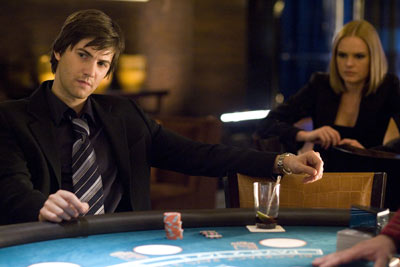 Over a seven-year period beginning in 1993, a group of math prodigies from the Massachusetts Institute of Technology won more than $3 million playing blackjack in Las Vegas and elsewhere by counting cards and using a cloak-and-dagger subterfuge system of signals and disguises. Their story, first chronicled by author Ben Mezrich in his best-seller "Bringing Down the House," is the basis of "21," with Jim Sturgess and Kate Bosworth. Kevin Spacey also stars as the modern-day Fagin of a math professor who teaches his charges to beat the casinos.

Sturgess ("Across the Universe," "The Other Boleyn Girl") plays Jim Campbell, an MIT senior who's been accepted to Harvard Medical School but lacks the $300,000 to pay for it. He initially resists when he's recruited to join the clandestine card counters, but he relents when he realizes it's an answer to his financial problems. Soon, though, he's seduced by the lure of Sin City and sudden wealth. As director Robert Luketic puts it, "It's about one boy's journey through the rabbit hole that is Las Vegas. And it gives you a glimpse of what it's like to be a VIP, what it's like to be on the other side of the fence."

Luketic didn't have to fake Las Vegas verisimilitude as he shot on location there -- a logistical complexity in itself when you're dealing with working casinos -- and in Boston, but streamlining and simplifying the story for the screen and making the game of blackjack cinematically compelling were among the challenges he faced in bringing "21" to the screen.

So how did he do it? How did the real-life card counters beat the system? And how much in the film is truth and how much is dramatic license? Luketic and Jeff Ma, the MIT grad on whom the Ben Campbell character is based, give us the rundown in this article.

­­Gambling is attractive to some people because it mirrors the uncertainty of everyday life and quickly resolves that uncertainty. Learn more about th­e motivations behind gambling in this video, brought to you by the Discovery Channel.