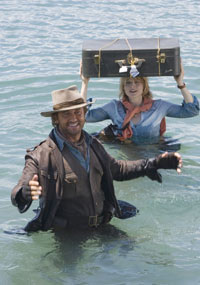 "Never work with children or animals," the notoriously grumpy W.C. Fields once said. The makers of "Nim's Island" obviously ig­nored this advice in adapting Wendy Orr's 2002 children's book for the screen -- the movie revolves around a girl who lives alone with her marine biologist father and several exotic pets on a tropical island in the middle of nowhere. Think "The Swiss Family Robinson" with Internet access.­

Eleven-year-old Abigail Breslin, an Oscar nominee for "Little Miss Sunshine," stars as the resourceful and self-reliant Nim, who's left stranded in her island tree house when dad Jack (Gerard Butler, of "300") sets out in his boat to gather specimens and doesn't return. She reaches out via e-mail to her favorite adventure writer, Alex Rover, unaware that she's corresponding not with the brave hero but his fearful, agoraphobic creator, Alexandra Rover (Jodie Foster), who has to muster the courage to leave her San Francisco house so she can come to Nim's aid. In a dual role, Butler also plays the fictional Alex Rover, who serves as conscience, confessor and inspiration to Alexandra.

The trio of human stars wasn't a problem for married co-directors Mark Levin and Jennifer Flackett, who wrote the screenplay with Joseph Kwong and producer Paula Mazur. While computer graphics programs can and do create movie creatures of all types these days, the sea lions, pelicans, lizards and other fauna that populate "Nim's Island" are -- with a few animatronic and CG exceptions -- living, breathing animals that came with their own issues, requirements and limitations.

Read on to find out how the directors and actors dealt with the critters, the logistics of shooting on location in Australia, the stunt work, and other aspects of bringing this action-adventure tale to the big screen.